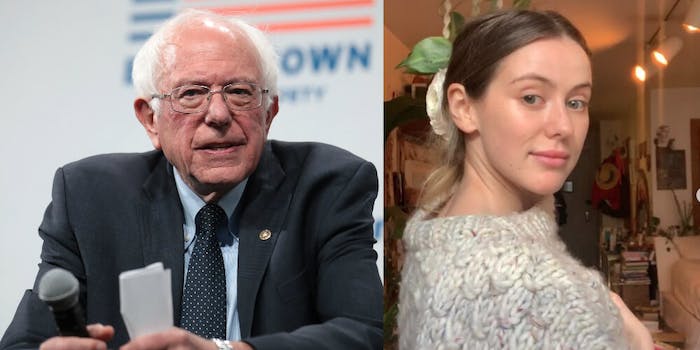 Caroline Calloway says she plans to campaign for Bernie Sanders

The 'scam princess' made the announcement on her Instagram Stories.

“Scam” princess Caroline Calloway has given Sen. Bernie Sanders (I-Vt.) her endorsement for the 2020 presidential election.

Via Instagram, where she boasts more than 700,000 followers, Calloway announced that she plans to campaign for Sanders this spring.

Calloway posted to her Instagram Stories early Tuesday afternoon that two of her goals “this spring are to volunteer campaigning for Bernie and to take a training course in empathetic listening so (she) can volunteer for a suicide hotline.”

Caroline Calloway announces that she plans to campaign for Bernie pic.twitter.com/obkqmDnT28

Calloway told the Daily Dot she made the decision to campaign for Sanders after talking about it with journalist Lauren Duca.

“She asked me what I was doing on a monthly basis to give back to the causes I care about,” Calloway said in a private message to the Daily Dot. “I realized all of my donations were financial, and I wanted to start volunteering my time in addition to pledging my money this year.”

Calloway’s recent announcement did not stop Twitter users from unleashing their critiques, with one calling Calloway’s endorsement “worse” than podcast host Joe Rogan’s endorsement of Sanders. Rogan announced his endorsement to listeners last week, receiving backlash from some voters due to Rogan’s “history of offensive commentary,” according to Vox.

Calloway, who has embraced her given scammer persona (She has a new book titled Scammer currently available for pre-order.), said she set her two goals due to her dedication to advocating for mental health and Sanders being her “candidate of choice.”

Sanders’ Medicare for All plan would expand Medicare coverage to include mental health and substance abuse treatment, according to his campaign website.

“Mental health is an issue I’ve struggled with myself, and the reason I lost my dad,” Calloway said.

In September 2019, Calloway announced via Instagram her dad had died by suicide. Calloway has not yet given details in which ways she hopes to volunteer for the Sanders’ campaign.