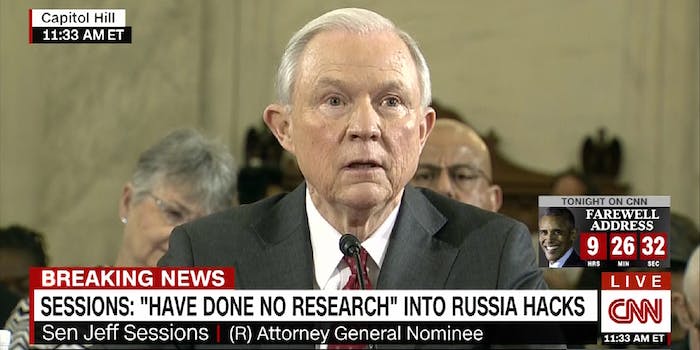 Questioned by the Senate Judiciary Committee on Wednesday over evidence of Russian meddling in the 2016 U.S. presidential election, Sen. Jeff Sessions (R-Ala.) acknowledged the outcome of a federal investigation as having been “honorably reached” by U.S. intelligence services.

Confirmation hearings began for Sessions, President-elect Donald Trump’s pick for attorney general, on Tuesday morning. The proceedings were interrupted numerous times by activists alarmed by Sessions’ record on civil rights stemming from his time as a federal prosecutor in Alabama during the 1980s.

An hour into the hearing, Sessions was interviewed by Sen. Lindsey Graham (R-S.C.) about the cyberattacks that upended the Democratic Party during the election. U.S. intelligence agencies, including the Federal Bureau of Investigation (FBI), say they are highly confident that the cyberattacks against the Democratic National Committee (DNC) and John Podesta, Hillary Clinton’s campaign chairman, were carried out by the Russians—specifically on the orders of Russian President Vladimir Putin.

“Some of my best friends are FBI agents.”

Sessions, who had never personally endorsed a presidential candidate until Trump, appeared to artfully dodge the line of questioning concerning the cyberattacks by establishing himself as ignorant of the details.

“Cyberattacks,” Graham said abruptly, signaling a change in topic from that of the Guantanamo Bay detention camp, which Sessions believes should remain open. “Do you think the Russians were behind hacking into our election?”

“I’ve done no research into that. I know just what the media says about it,” said Sessions, undoubtedly aware of Graham’s strong opinions on the topic. (Graham, who enthusiastically supports Sessions’ nomination, recently called any Republican “gleeful” about the disclosure of Democratic emails “not a patriot,” but a “political hack.”) “Do you think you can get briefed anytime soon,” asked Graham, to which Sessions replied: “Well, I’ll need to.”

“Do I like them? Some of my best friends are FBI agents,” Sessions replied.

“Do you generally trust them?” Graham asked.

After setting the ball, Graham asked whether Sessions was aware the FBI has concluded Moscow was behind the cyberattacks targeting the DNC and Podesta. Sessions answered affirmatively but did signal he agreed with the conclusion, something Trump has already done publicly. “I do understand that. Or at least, that’s what’s been reported,” Sessions said.

"I'm not saying they changed the outcome, but it's pretty clear to me they did" Graham says to Sessions of Russia meddling in the election.

Asked if there was any reason to be suspicious of the FBI’s conclusion—the NSA and the CIA also co-signed a report last week echoing the FBI’s judgement—Sessions limited his response. “Of their decision? I’m sure it was honorably reached,” he said.

While asking Sessions how he felt about “a foreign entity trying to interfere in our election,” Graham said it was “pretty clear” that Putin-directed cyberattacks altered the outcome of the U.S. election—a statement that seemingly implies that Graham believes Clinton may have won the election if Trump’s campaign had not been supported by Russian espionage.

“How do you feel about it, and what should we do?” Graham asked.

Sessions’ response appeared to mirror that of Trump, who has sought to downplay the significance of the DNC and Podesta hacks by lumping them together with other major cyberattacks of late—namely, the infiltration of the Office of Personnel Management by Chinese hackers. “We have penetration, apparently, throughout our government by foreign entities,” said Sessions. He acknowledged that it is a “serious matter” when a foreign nation uses information gained “intelligence-wise” to “impact another nation’s democracy.”

Sessions added that he believes the U.S. government needs protocols in place to respond to foreign espionage in cyberspace to ensure that “a price is paid even if we can’t prove the exact person who did it.”

During the hearing, Sessions also told Sen. Amy Klobuchar, Democrat of Minnesota, that he had “no reason to doubt” the intelligence community’s report and had “no evidence to indicate” that the Russian government was not involved.

Asked by Sen. Sheldon Whitehouse, Democrat of Rhode Island, if the FBI and U.S. Justice Department, which Sessions would direct as attorney general, would be allowed to continue investigating Russian interference in the election, Sessions replied, “If there are laws violated, and it can be prosecuted, of course, you have to handle that in an appropriate way.”