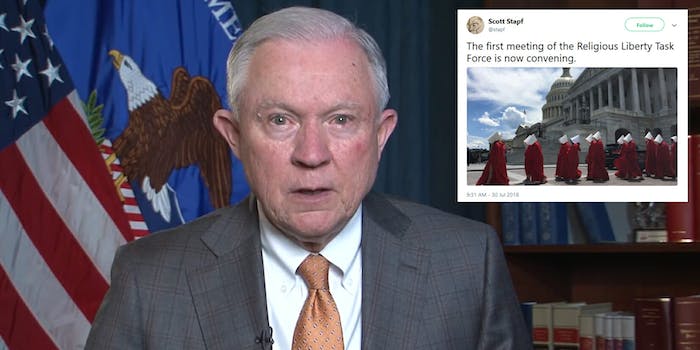 People criticized it as a way to discriminate.

Attorney General Jeff Sessions said on Monday that the Department of Justice would create a “religious liberty task force,” that would help the agency implement guidance from President Donald Trump.

“The task force will help the department fully implement our religious liberty guidance by ensuring that all Justice Department components… are upholding that guidance in the cases they bring and defend, the arguments they make in court, the policies and regulations they adopt, and how we conduct our operations,” Sessions said.

The task force comes after Sessions issued a memo on “religious liberty,” which many called a blueprint for discrimination.

The attorney general’s remarks were met with scorn online, with many people believing the task force would be used to go after people of different faiths and members of the LGBTQ community.

Jeff Sessions just announced a Religious Liberty Task Force which I assume, based on its name and who announced it, will take on the task of forcing everyone of other religions to convert to Christianity.

We need to have a talk.

Others expressed their displeasure over the task force’s creation by mocking it.

I hope the religious liberty task force merges with the space force & finally brings the word of god to those heathen aliens.

The first meeting of the Religious Liberty Task Force is now convening. pic.twitter.com/k7FKgmOBHv

This isn’t the first time people have been critical of Sessions’ “guidance” on religious liberty.

Last year, the attorney general issued a 25-page memo where he stressed that government agencies should stand with religion when it comes to discrimination laws.

In the memo, Sessions wrote that people should not have to choose between “living out his or her faith and complying with the law” except under the “narrowest circumstances.”