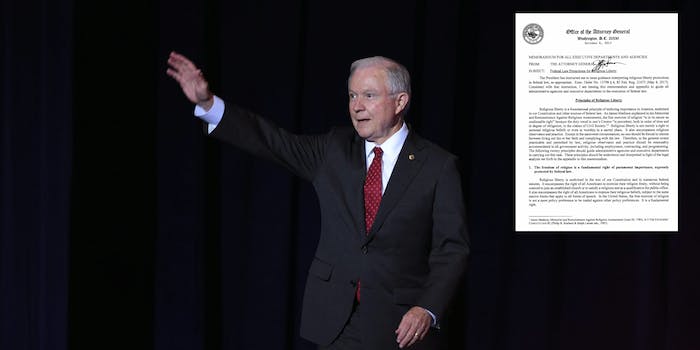 The 25-page memo tells federal agencies to err on the side of religious freedom.

The memo calls religious liberty a “foundation principle” in America and essentially argues for the federal government not to interfere in citizen’s religious beliefs or behaviors.

“Except in the narrowest circumstances, no one should be forced to choose between living out his or her faith and complying with the law,” Sessions’ memo reads.

The memo argues that religious freedom extends to not only people, but organizations.

The memo was made at the instruction of an executive order signed by President Donald Trump. It lists 20 “principles of religious liberty” including that “religious employers are entitled to employ only persons whose beliefs and conduct are consistent with the employer’s’ religious precepts.”

The religious liberty memo echoes other moves made by the Trump administration, most recently announcing it would roll back the federal mandate for employers to cover birth control in health insurance plans if they object to doing so “based on its sincerely held religious beliefs” or “moral convictions.”

Critics argue the “guidance” clears the way for religious exemptions for employment, services, and programs.

“Donald Trump just let the fox into the hen house,” HRC Legal Director Sarah Warbelow said in a statement. “Through this Executive Order, Trump has directed Attorney General Jeff Sessions—a man who has denied LGBTQ people equality under the law—to seek a license to discriminate across all areas of the government. This order is incredibly alarming, particularly for millions of LGBTQ people and women across the nation who are among those most frequently subjected to discrimination under the guise of religion. We are watching and we will challenge any effort by Jeff Sessions or other agencies of Trump’s Administration to license discrimination.”

You can read Sessions’ memo here.