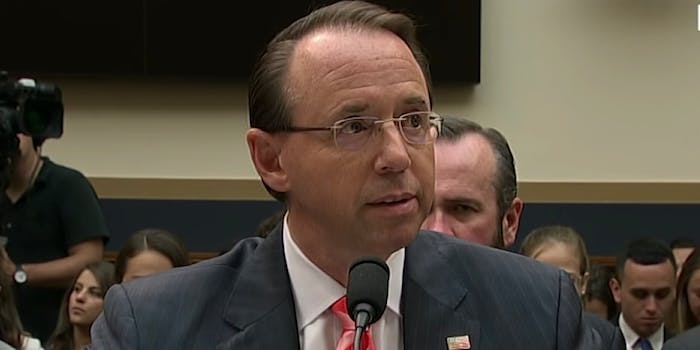 GOP lawmakers introduced articles of impeachment against him.

“For 9 months we’ve warned them consequences were coming, and for 9 months we’ve heard the same excuses backed up by the same unacceptable conduct,” Meadows, leader of the House Freedom Caucus and ally of President Donald Trump, said in a statement. “Time is up and the consequences are here. It’s time to find a new deputy attorney general who is serious about accountability and transparency.”

The articles allege that Rosenstein was a key witness in the Mueller investigation and that he therefore should have recused himself. Per the Hill:

They charge that Rosenstein has a conflict of interest in Mueller’s probe, stating that he is a ‘witness’ who could be called to testify in the ongoing investigation into potential surveillance abuse since he signed off on an FBI surveillance renewal application to wiretap Carter Page, a former adviser to the Trump campaign.

Top Democrats in the House on Wednesday issued a joint statement condemning the call for Rosenstein’s impeachment as a “panicked and dangerous attempt to undermine an ongoing criminal investigation in an effort to protect President Trump.”

In mid-March, it was speculated that Trump would fire Rosenstein. A memo released at the time showed Rosenstein had authorized Mueller to investigate Paul Manafort, former campaign chairman for Trump, on whether he was “colluding with Russian government officials” during the election.