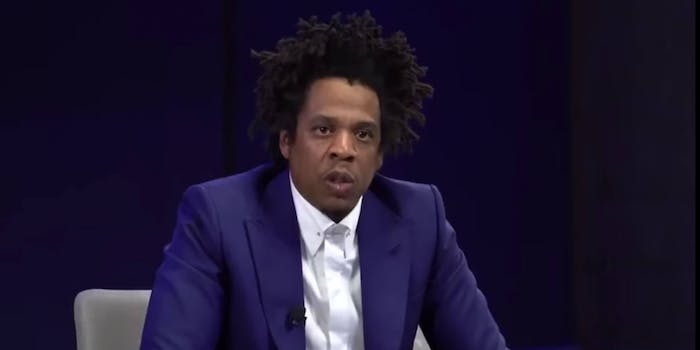 The mogul tried to have the audio removed from YouTube.

Jay-Z attempted to have several videos removed from YouTube that contained deepfaked audio of his own voice.

The videos, highlighted by XOXO festival co-founder Andy Baio on the website Waxy, were published to the YouTube channel Vocal Synthesis.

The deepfake audio is made by teaching a neural network the characteristics of a voice by feeding it large amounts of voice samples. A user can then simply type what they want a voice to say.

Vocal Synthesis had created numerous videos in which Jay-Z’s iconic voice was used to recite everything from William Shakespeare’s “To Be or Not to Be” soliloquy to Billy Joel’s “We Didn’t Start the Fire.”

But the attention brought to the videos also caught the eye of Jay-Z’s entertainment agency Roc Nation.

Although the channel has uploaded numerous Jay-Z-related videos, Roc Nation took exception to the aforementioned clips and opted to file copyright claims against both.

Roc Nation specifically argued, according to Waxy, that the “content unlawfully uses an AI to impersonate our client’s voice.”

The move appears to be the first case ever in which a copyright claim was used in order to take down deepfake audio clips. Deepfake videos, on the other hand, have been targeted with copyright strikes on YouTube in the past. A deepfake video of Kim Kardashian was pulled just last year.

Roc Nation’s copyright claim was called into question by Vocal Synthesis not long after.

“I’m not a lawyer and have not studied intellectual property law, but logically I don’t really understand why mimicking a celebrity’s voice using an AI model should be treated differently than someone naturally doing an (extremely accurate) impression of that celebrity’s voice,” the channel has said.

It appears YouTube may agree with that interpretation. Shortly after removing the videos, the platform opted to reinstate both.

A Google spokesperson told the Verge the copyright claims “were incomplete.”

“After reviewing the DMCA takedown requests for the videos in question, we determined that they were incomplete,” the spokesperson said. “Pending additional information from the claimant, we have temporarily reinstated the videos.”

It remains uncertain whether Roc Nation will challenge YouTube’s decision. The entertainment company so far has declined to publicly comment on the matter.