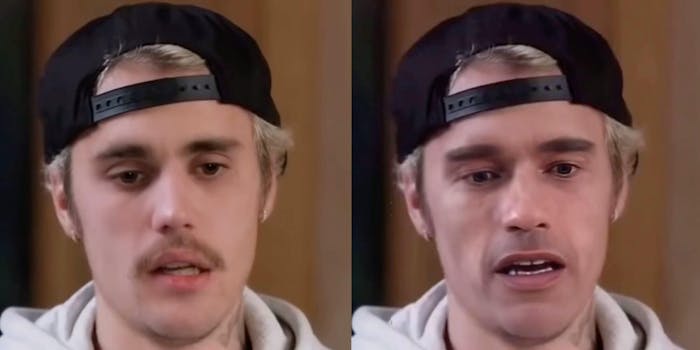 Become anyone from Billie Eilish to Keanu Reeves in a matter of minutes.

The bar for creating deepfakes has undoubtedly been lowered since the technology first emerged in late 2017. Until now, developing such a video required specific knowledge, patience, and high-end computer hardware that few possess.

But what if anyone could create a decent-looking deepfake right from their mobile device? A new app for the iPhone known as Impressions is aiming to do just that.

The app, which launched in select countries in late February before its global release last week, lets users transform themselves into an array of celebrities with just a few clicks.

The process is simple: Choose a celebrity, film or upload a short video, and watch yourself become anyone from Hollywood actor Keanu Reeves to pop star Billie Eilish.

The project officially began in August of last year, Impressions CEO Murat Deligoz told the Daily Dot. The app works by uploading your short clips to Impression’s cloud servers, which utilize powerful graphics cards to carry out the deepfake process, before returning the completed videos to your phone.

“We built the architecture in this manner because phone hardware is not yet capable of doing this type of intensive processing,” Deligoz noted.

The San Francisco-based company uses proprietary machine learning algorithms designed for speed to create your deepfake in just minutes. And while the quality will not rival videos created by the technology’s most prolific users, the clarity of Impressions’ deepfakes, when created under ideal conditions, can be impressive.

Impressions is not the first deepfake app on the market, but does provide more features than others. Chinese app ZAO, for example, only allows users to add their own face to the bodies of actors from select movie scenes, while U.S.-based deepfake app Doublicat only lets users add their faces to animated GIFs.

Deligoz says his company is constantly training its algorithms to learn the unique intricacies of celebrity faces from thousands of photos and videos. At the moment, Impressions is releasing three to four new faces every week.

Its latest additions include actors Eddie Murphy, Matthew McConaughey, and Ryan Reynolds. The app even includes young and old versions of actors like Al Pacino and Arnold Schwarzenegger.

Young artists such as Ariana Grande, Rhianna, and Selena Gomez can be found alongside late Queen frontman Freddie Mercury. Acting icons include Brad Pitt, Bruce Lee, and Leonardo DiCaprio, as well as Tom Cruise, Tom Hanks, and Will Smith.

As with any tool that scans a user’s face, concerns over privacy are present. Impressions states that original videos, including those that you up upload of yourself, remain on the company’s servers as long as the user keeps the deepfaked-version in the app.

If a user chooses to create a deepfake, they can save a copy of the video to their phone’s photo gallery and then delete the original in the app. This will cause the copy on Impression’s servers, the company says, to be “immediately” deleted.

Impressions says that it plans to develop “deepfake detections models” in the future based on users’ source videos. Deligoz stresses that the feature will be opt-in, meaning users will be asked to provide consent.

Aside from being able to upload and transform videos of yourself, users can also upload clips of others.

In experimenting with the app, the Daily Dot uploaded an 8-second clip of Justin Bieber and attempted to turn the pop star into Arnold Schwarzenegger and Keanu Reeves.

Not all deepfakes will come out quite as clear, however. Numerous factors will affect how a clip appears, including the source video’s quality, the lighting, and whether a face is clear of obstructions.

As seen in the example created by the Daily Dot below, an attempt to turn Netflix star Joe Exotic into Bieber did not come out as impressively as other deepfakes.

As with any technology, advancements will undoubtedly move the app forward in the near future. Deligoz says Impressions’ data science team is actively researching ways to optimize the deepfake process to ultimately let the conversion take place on a user’s phone.

Impressions also plans to introduce a lip-sync feature in its next update before eventually releasing an Android version of the app as well.