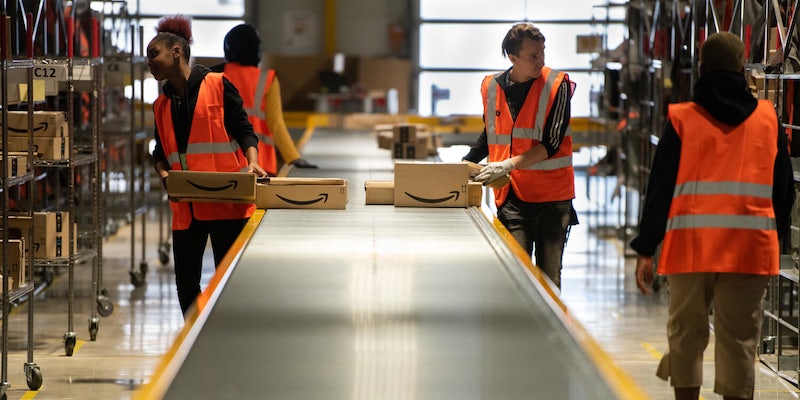 During the coronavirus pandemic that has shut down large swathes of the country, retail and delivery behemoth Amazon is in a thorny spot.

On the one hand, Amazon is one of the few companies capable of providing delivery on a mass scale, a societal good at a time when businesses are shutting down, and people in need of resources are too scared or unable to leave their houses.

But to provide those services, the retailer relies on a bevy of low-paid workers who, through no fault of their own, are now at the frontlines of the outbreak.

Because of the convenience of the on-demand economy Amazon helped create, Americans are largely willing to offload the risk of contracting coronavirus to underpaid warehouse stockers and delivery drivers if it keeps them from having to venture outside.

Amazon has claimed that it understands the risk and is providing basic levels of safety and sanitation for the workforce they employ.

Workers say that is not the case.

Employees at Whole Foods, which Amazon owns, are striking over conditions at the grocery stores. Amazon workers are trying to strike at distribution centers, like in Staten Island, where they demanded the facility be cleaned after a worker contracted coronavirus.

On Wednesday, Amazon fired the person who organized the strike. The’s company’s reasoning was that Chris Smalls, who had been asked to self-quarantine, was violating the company’s social distancing rules.

Given how anti-union Amazon is, that argument (even if true), didn’t carry much weight for many people.

Sen. Bernie Sanders (I-Vt.), who has been vocal in his criticism of Amazon, decried the move, calling it “immoral.”

Amazon’s top public relations person, Jay Carney, who has shown his face on Twitter before, replied that he was “confused” by Sanders’ response.

“Thought you wanted us to protect our workers?” Carney wrote. “Mr. Smalls purposely violated social distancing rules, repeatedly, & was put on Paid 14-day quarantine for COVID exposure. 3/30 he returned to the site. Knowingly putting our team at risk is unacceptable.”

Carney, who used to be press secretary for President Barack Obama, is not confused by what Sanders said, despite his cheeky protestations. He is using Sanders’ macro-claim, that Amazon treats its workers horribly (which Carney is almost tacitly admitting), to justify a micro-action: firing an employee who called out Amazon for not protecting its workers.

Many people had choice admonishments for Carney.

Carney decided to respond to one particular “fuck you” from the New Republic’s Libby Watson.

Then, later, Carney wondered into the ether of what appears to be the only organizing principle of the Democratic establishment these days: The tweets being too mean.

On the heels of the tweet exchanges and employee walkouts, Amazon pledged to provide temperature checks and masks to workers.

Despite what the people in charge tell you, collective action (and mean tweets) work.