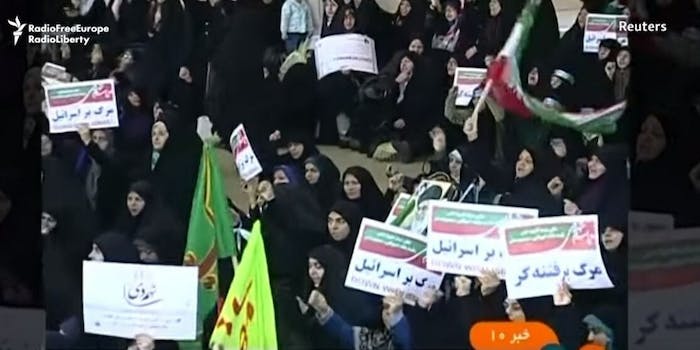 More than half of the country's population reportedly uses Telegram.

As many Iranians continue their government protests, the country has shut down the Telegram and Instagram apps that allow many citizens to communicate with other protesters and the outside world, according to multiple media outlets.

On the third day of Iran’s largest protests since 2009 that has reportedly killed two people, authorities “temporarily” blocked the apps to “maintain peace,” the Washington Post reported.

“It has been decided in the highest security level to restrict access to Telegram and Instagram,” a government source told Iranian state TV, via Reuters.

Pavel Durov, the founder and CEO of Telegram, confirmed the blockage on Twitter.

Iranian authorities are blocking access to Telegram for the majority of Iranians after our public refusal to shut down https://t.co/9E4kXZYcP9 and other peacefully protesting channels.

On Saturday, Iran’s communication minister asked Durov via Twitter to shut down a specific Telegram channel for inciting violence, according to CNN. Durov agreed to it.

A Telegram channel (amadnews) started to instruct their subscribers to use Molotov cocktails against police and got suspended due to our "no calls for violence" rule. Be careful – there are lines one shouldn't cross. Similar case from October – https://t.co/OWQFBLywjr

The protests started when citizens facing rising prices on food and gasoline began their public dissent. It has since turned political with people reportedly chanting slogans against Supreme Leader Ayatollah Ali Khamenei and President Hassan Rouhani. The demonstrations have spread to cities throughout the country.

President Donald Trump weighed in on the protests via Twitter, giving his support to the protesters.

Many reports of peaceful protests by Iranian citizens fed up with regime’s corruption & its squandering of the nation’s wealth to fund terrorism abroad. Iranian govt should respect their people’s rights, including right to express themselves. The world is watching! #IranProtests

The entire world understands that the good people of Iran want change, and, other than the vast military power of the United States, that Iran’s people are what their leaders fear the most…. pic.twitter.com/W8rKN9B6RT

Oppressive regimes cannot endure forever, and the day will come when the Iranian people will face a choice. The world is watching! pic.twitter.com/kvv1uAqcZ9

According to the BBC, more than 50 percent of the country’s population of 80 million people are active on Telegram.