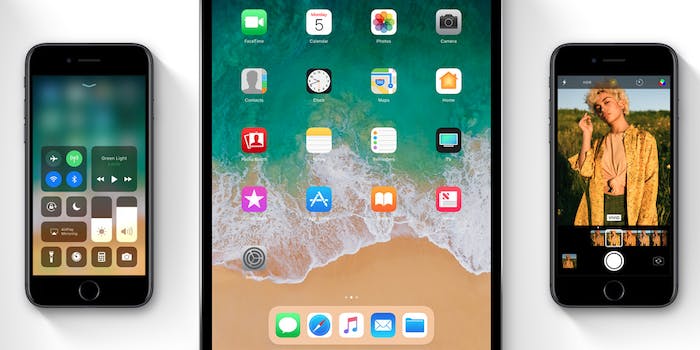 The 7 most important new features in iOS 11

It's time to get acquainted with your iPhone's newest features.

Whether or not you plan to buy the new iPhone, you can still take advantage of some of Apple‘s newest phone features—thanks to iOS 11. Apple debuted iOS 11 back in June, but today, it’s available to download.

iOS 11 isn’t a departure from Apple’s last OS update, 2016’s iOS 10. While it introduces some new capabilities and new design elements, it largely builds on your existing phone operating system. (That is, it still follows the same design Apple introduced back in iOS 7.) It’s just more polished and fills in some gaps in functionality you may have expected in the past.

Here is everything you need to know about iOS 11. (And for instructions on how to download iOS 11, head here.)

At long last, iOS 11 introduces a Files app: one unified place for all your photos, files, and downloads. It’s not a full desktop-style file system, but it should help you keep things more organized. That is, you won’t have to hunt from app to app to find that document you edited; it even has a section for recently opened files. Files will work across all your iOS devices, iCloud Drive, and other cloud services such as Dropbox or Box.

One of the biggest changes you’ll notice in iOS 11 is Apple’s complete redesign of the App Store. With its new look, Apple is trying to make it easier to help you discover new apps you’ll enjoy.

Notably, the App Store now splits apps and games into their own separate sections. It also has a “Today” view, with content suggestions (including an App of the Day and Game of the Day) that change daily. When you look at an app’s page in the App Store, that look has been updated as well. Now you can more easily see reviews, videos of the app in action, and notes like whether it’s an Editor’s Choice pick or not.

Like Facebook Messenger and (reportedly) WhatsApp, you’ll be able to pay your friends directly in Messages chat threads through Apple Pay. You can send or request money person to person, with an associated credit or debit card, then the funds are kept in “Apple Pay Cash,” which you can either withdraw from, use in stores, or send to another friend.

While iOS 11 brings a handful of updates to the iPhone, it really steps up the iPad interface. Now, there’s a new dock that persists no matter what screen you’re on. You can customize what apps you want in the dock (as you’ve always been able to), but now, Apple will also “intelligently suggest” apps on the right side of the dock (ones you’ve used recently on your iPad, or on your iPhone or Mac, for example).

From this dock you can also open a second app for multitasking, using Slide Over—if you just want to use it for a minute or two—or Split View, if you’ll be swapping between those two apps for a longer time. And now when you’re using Split View, you can drag-and-drop photos, text, and more from one app to another.

Apple also made some useful changes to the iPad keyboard. You can access punctuation and numbers by swiping downwards across the keys, for example.

Control Center is the panel of shortcuts you can access by swiping upwards from the bottom of your iPhone screen. Here, you can switch on and off Airplane Mode, access the calculator, get your music controls, and more. Before, the implementation was awkward: It opened with one shortcut screen, but you could swipe right to access additional settings. Now, Control Center is one screen set of panels you can customize in your phone’s settings.

7. Do Not Disturb While Driving

This feature may not be flashing, but honestly, it may be one of the most important updates Apple has ever made. Your phone will now detect when you’re moving in a vehicle (based on movement or Bluetooth connections) and will help keep you focused on the road. It will silence notifications, keep the screen dark, and give you the option of sending an auto-reply message to contacts letting them know you’ll respond once you’ve arrived at your destination. Considering one out of four accidents in the U.S. is caused by texting and driving, this update could have seriously positive consequences for public safety.