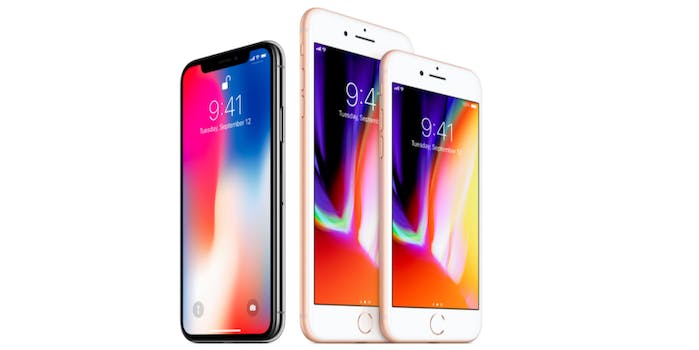 iPhone 8 vs. iPhone 8 Plus vs. iPhone X: Which new Apple phone should you buy?

Which one of Apple's new smartphones is right for you?

Apple unveiled three new flagship smartphones on Tuesday at its special event, the first in the Steve Jobs theater at the company’s new “spaceship” campus. The device getting all the attention is the new flagship iPhone X (pronounced “ten”), a $1,000 masterpiece with top-of-the-line hardware. But what about all the iOS users who aren’t willing to spend that much on a smartphone?

If you’re wondering if the 10th-anniversary device is really worth its four-figure price tag, or if you should even upgrade from last year’s iPhone 7 and 7 Plus, here’s what you need to know about the iPhone 8 ($700) and iPhone 8 Plus ($800) and how they compare to the iPhone X.

Why the iPhone X is worth it

The first thing you’ll notice on the iPhone X is its gorgeous 5.8-inch OLED display. You should expect it to be bright, vivid, and sharp, and likely among the best smartphone displays ever made. The 8 and 8 Plus, on the other hand, are equipped with LCD Retina displays, the same panels used in the iPhone 7.

Is the difference in quality between LCD and OLED worth $300 on its own? Probably not. Chances are you’ve never complained about the quality of the iPhone 7’s display, and the 8’s is even better. Still, if you want to view iOS 11 on the best screen in town, the X is the only choice.

An even better reason to get the X is for its edge-to-edge design, which maximizes the size of your display while keeping the phone relatively compact. Not convinced? Check out these dimensions. The iPhone X comes with a 5.8-inch display and stands at 5.56 inches tall, while the iPhone 8 Plus has a smaller 5.5-inch display but is significantly larger at 6.24 inches. The iPhone 8’s display is a full inch smaller than the iPhone X’s but its frame is only .21 inches shorter.

The iPhone X, with its bevy of front-facing cameras and sensors, is also the only iPhone with Face ID, Apple‘s new authentication method that scans your face to unlock your device or make payments using Apple Pay. (Of course, that might not be a selling point for all customers, especially those concerned about its privacy implications.)

The X also has the highest imaging potential of the three phones with dual-lens 12MP cameras that are equipped with optical image stabilization. The iPhone 8 only has one lens, but while the iPhone 8 Plus has two lenses, only one of them has OIS and the telephoto lens has a “smaller” f/2.8 aperture compared to the f/2.4 on the iPhone X. The 7MP front-facing camera on the iPhone X is the only one capable of taking Portrait images and Animoji.

Finally, the iPhone X has a stainless steel case, an improvement in durability compared to the iPhone 8’s aluminum (even if it doesn’t improve the phone’s IP67 waterproof certification).

If you’re not blown away by its edge-to-edge OLED display, aren’t interested in Face ID, don’t need dual-lens OIS or front-facing Portrait mode, and can’t get yourself to look another minute at those creepy Animoji, then save yourself a grand and look elsewhere.

Probably not. I’d wholeheartedly recommend upgrading your old iPhone to a device with an edge-to-edge display, but that sadly doesn’t apply to the iPhone 8 and iPhone 8 Plus. It’s 2017, bezels are dead, and yet the 8 retains the same chunky design as the iPhone 7.

Compared to the Galaxy S8, LG G6, and Essential Phone—three Android devices in the same price bracket—the iPhone 8 and 8 Plus will look a generation behind.

That’s not to say the iPhone 8 doesn’t have a lot to offer. It is, in many ways, a big improvement over its predecessor, but none of its new features and components, at least on paper, warrant an immediate upgrade

Still, the iPhone 8 does hold a few advantages compared to the 7. The biggest is QI wireless charging compatibility, which lets you charge your device by placing it on a pad. It’s a neat feature but has its disadvantages. For example, it’s hard to use your phone while it’s lying down, and the large pads aren’t great for travel.

The iPhone 8 also has a larger 256GB storage model compared to the iPhone 7, which maxed out at 128GB. And of course, the new device comes with upgraded internals, including a new A11 processor and brighter camera lens with optical image stabilization.

Want the absolute best hardware running iOS? The decision is easy: Splurge on the iPhone X. In fact, consider the X if you want some of the best smartphone hardware ever made. However, things get a bit more complicated if you’re on a budget.

I recommend looking elsewhere if you are even the slightest bit worried about the financial hit you’ll take buying an X. There are far too many excellent alternatives to consider that will save you tons of money and still offer everything you want in a mobile device.

Is the iPhone 8 a good alternative? Yes. Is it the best? That’s debatable. It’s undoubtedly the next best iPhone, but without an edge-to-edge display, its value doesn’t appear to hold up to high-end Android devices. However, if you need to upgrade your old phone and want the stability and security iOS offers but aren’t willing to spend $1,000, the iPhone 8 will do just fine—just don’t expect to be blown away.