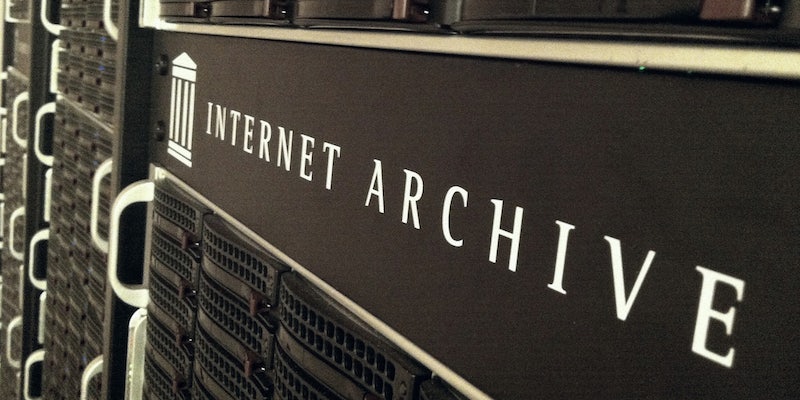 The Internet Archive would rather be safe than sorry.

It’s too early to know whether President-elect Donald Trump will be a threat to the internet as we know it. But the folks tasked with preserving the web for future generations aren’t taking any chances.

“On November 9th in America, we woke up to a new administration promising radical change,” the nonprofit organization wrote in a blog post. “It was a firm reminder that institutions like ours, built for the long-term, need to design for change.”

The Internet Archive maintains tools like the Wayback Machine, which allows anyone to archive individual Web pages, resulting in the saving of some “300 million web pages each week;” the Open Library, which offers around 3 million free ebooks; and the Political TV Ad Archive, where journalists and researchers can check politicians’ claims.

Trump has said little about internet policy, but early signs point to a shakeup in how previous administrations have treated the Web. Last December, Trump said the U.S. should consider “closing up the internet in some way” in its effort to curb Islamic State recruitment. And Trump advisor Mark Jamison has advocated for shutting down the Federal Communications Commission, which regulates the internet in ways that help keep it democratic and free of stifling corporate control.

Oh, and did we mention that Trump will have the NSA at his disposal?

In its quest to keep “our cultural materials safe, private, and perpetually accessible,” the Internet Archive is asking supporters to donate toward the “millions” of dollars it will cost to create a Canadian backup of the internet’s history, which the organization has maintained for more than 20 years.

“Throughout history, libraries have fought against terrible violations of privacy—where people have been rounded up simply for what they read,” the organization wrote. “At the Internet Archive, we are fighting to protect our readers’ privacy in the digital world”—a world that is now moving just a little bit north.