The great Instagram follower purge of 2014 is upon us

Fake Instagram accounts have blossomed over the course of 2014. From porny young Russian women to weirdly innocuous follow-collecting bots, sentient Instagram users saw their follow counts artificially inflated by this weird new crop of IG flora. After issuing a warning that it intended to cull many of these fake accounts, Instagram appears to have finally swung the axe—and IGers aren’t happy about it.

Not everyone just lost a few followers here and there—some accounts were faced with embarrassingly massive follower count plunges. Rapper Ma$e reportedly dropped from 1.6 million followers to 270,000 before deleting his account out of what we can only assume are deep-seated feels of righteous anger. Maybe celebs will feel consoled by the verified badges that Instagram insists we’ll see roll out soon? A little blue check can go a long way, if you ask us.

Instagram warned of the coming purge earlier this month when the company announced that it had reached 300 million active users—an impressive milestone for the Facebook-owned photo sharing app. The company was very cautious in rolling out its spam-busting plans. In a note, Instagram CEO Kevin Systrom warned about the company’s plans to keep Instagram “authentic.”

“We’re committed to doing everything possible to keep Instagram free from the fake and spammy accounts that plague much of the web, and that’s why we’re finishing up some important work that began earlier this year,” Systrom said. “We’ve been deactivating spammy accounts from Instagram on an ongoing basis to improve your experience. This means that some of you will see a change in your follower count.”

Systrom explained that anyone impacted by the great spam purge would see a pop-up message in the app, and those messages began appearing on Dec. 10. 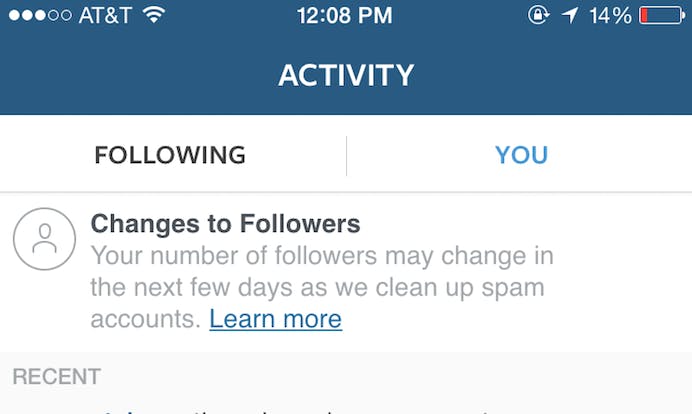 Earlier this week, Instagram pushed arguably its biggest update in two years, introducing five new filters and a handful of other features, like real-time commenting. That update was Instagram version 6.4, and the next day the app pushed another minor update, version 6.4.1. It appears that the spam and bot crackdown accompanied the new version of the app, as IGers react to the drop in their prized follow accounts across the Web.

If you’ve seen a drop in your follower count, let us know. In the meantime, we’ll be aggressively hashtagging our way back into IG popularity, one #followforfollow at a time.