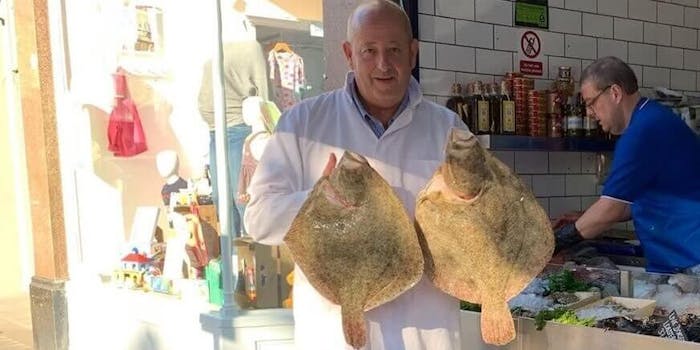 'I have no idea why a vegan would follow a fishmonger on social media in the first place.'

Rex Goldsmith posted a video on his Instagram account last week of a display at his shop, the London-based Chelsea Fishmonger, and hoped it might catch the attention of a few potential customers.

“Instagram is a shop window for us business people who put stuff on it,” Goldsmith told BBC. “I can put a video or photo up of a particular fish, and I’ll often get direct messages or phone calls saying ‘save one for me’—it’s a good connector.”

But instead of potential customers, Goldsmith told the BBC that what he got was a sensitive content warning—and a censored video.

“I totally understand censorship—but when you think that Instagram is owned by Facebook, and if you look at some of the videos on Facebook, they are disgusting—some are violent, some have foul language. I find it a bit bizarre that they can then think a bit of cod fillet is offensive,” Goldsmith told BBC.

Instagram has since apologized and uncensored the video, telling BBC that the post had been “mistakenly flagged.”

According to the Telegraph, this was the second time this has happened to Goldsmith in two weeks.  He believes that the post may have been flagged as offensive by a vegan.

“If they’re going to pick on me, why don’t they pick on one of the big companies who use the methods of farming that are bad for the environment and fish welfare,” Goldsmith told the Telegraph.

Goldsmith is not the only one who’s meat photos are being flagged. Earlier this year, chef Olia Hercules said her photo of pig ears and feet were also mistakenly censored.

The Vegan Society, a U.K.-based charity, told the Telegraph that it knew vegans were flagging pictures of meat as offensive on various social media sites but recommended that members just block the users posting the pictures instead.

“I have no idea why a vegan would follow a fishmonger on social media in the first place,” Goldsmith told the Telegraph.

Goldsmith told the Telegraph that if the censorship continues, he and his fellow fishmongers and butchers will stop using the site altogether.