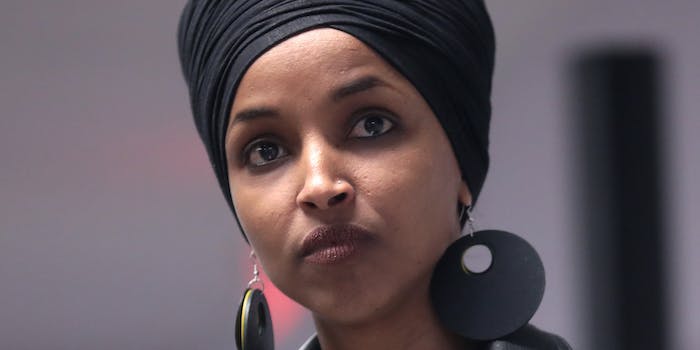 'Every time I speak out on human rights I am inundated with death threats.'

Rep. Ilhan Omar (D-Minn.) and her officer are once again receiving racist threats following her comments comparing the United States and Israel to Hamas and the Taliban.

The speaker then goes on to say that “Muslims are terrorists. And [Omar] is a raghead n****r. And every anti-American communist piece of shit that works for her, I hope you get what’s fucking coming for you.”

“Every time I speak out on human rights,” Omar tweeted with the audio, “I am inundated with death threats.”

Omar blamed both far-right media coverage and politicians for inciting the threats, sharing screenshots of a Fox News article covering her comments about American, Israel, Hamas, and the Taliban, and of a tweet from Rep. Lauren Boebert (R-Colo.) calling Omar an “honorary member of Hamas.”

The new threat came after Omar tweeted a video asking Secretary of State Anthony Blinken how both Israel and Hamas and the Afghan government and Taliban in their separate conflicts could all be held accountable for human rights violations.

“We must have the same level of accountability and justice for all victims of crimes against humanity,” she wrote, captioning her tweet of the video. “We have seen unthinkable atrocities committed by the U.S., Hamas, Israel, Afghanistan, and the Taliban.”

The tweet initially created an uproar of criticism, including from some of her colleagues. (Omar has previously been criticized and called antisemitic for her comments on Israel.)

“Equating the United States and Israel to Hamas and the Taliban is as offensive as it is misguided,” Rep. Brad Schneider (D-Ill.) wrote in a press release signed by 11 other House Democrats criticizing Omar’s comment.

“The United States and Israel are imperfect and, like all democracies, at times deserving of critique, but false equivalencies give cover to terrorist groups,” he continued, urging the Minnesota representative to clarify her comments.

Omar’s Senior Communications Director Jeremy Slevin defended Omar’s initial question to Blinken, writing that it had to do with ongoing investigation by the International Criminal Court in a statement Thursday.

“As usual, the far-right is ginning up hate against Rep. Omar for a technical question about an ongoing investigation,” he wrote. “And now some of her own Democratic colleagues are ginning up the same Islamaphobic hate against her, accusing her of giving ‘cover to terrorist groups’ simply for exercising oversight over a criminal investigation.”

He also wrote that Omar and her office have see an increase in threats since the controversy began.

Omar has been a persistent target of online hate and threats in the past, according to the Washington Post, and has had to have her security increased previously following onslaughts of hate.

It was not immediately clear if the person who threatened Omar would be investigated or if the congresswoman would again being under increased security.