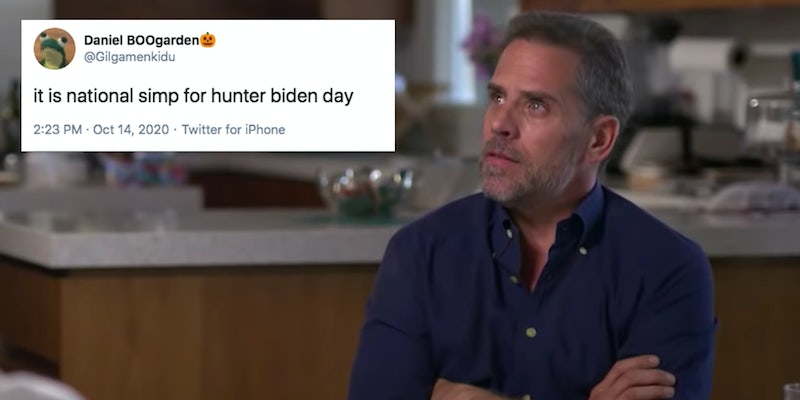 People are simping hard over those Hunter Biden photos

'It is national simp for Hunter Biden day.'

Twitter users are reacting to candid photos released by the New York Post on Wednesday showcasing the personal life of Hunter Biden.

The photos, published alongside a questionable story about alleged corruption in the Biden family, appear to show Hunter engaged in some rather interesting activities, to say the least.

One photo purports to show Hunter possibly sleeping in bed with a crack pipe in his mouth. Another shows a grizzled Hunter laying in a bathtub, this time with a cigarette hanging from his mouth.

“When you do drugs, is it compulsory to lie shirtless and dazed in a bathtub for a photoshoot like #HunterBiden,” @TricepBrah said. “I always see this in movies. Laying in a cold, ceramic bathtub with no water seems super comfortable.”

Many responded by praising Hunter, referencing the famous Virgin vs. Chad meme when comparing Biden’s son to the children of President Donald Trump. “The Virgin Donald Trump Jr. vs the Chad Hunter Biden,” @proustmalone said.

Others even began simping for Hunter, speaking favorably of his aesthetic.

“It is my sad duty to admit that hunter biden is trashy hot,” one person tweeted after the photos were released.

“It is national simp for hunter biden day,” another said.

“Sorry, but Hunter Biden rules,” @GMPaiella said. “The only cool thing about the Democratic party.”

One Twitter user even recreated Hunter’s purported crack pipe photo with her dog.

Hunter was also mocked as well, with some arguing that he resembled a character from the hit video game Grand Theft Auto V.

Hunter was also used in numerous other popular memes, too.

“People really out there judging this Hunter Biden photo like they haven’t seen this exact same thing staring back at them in their laptop reflection this year,” @ChaseMit said.

It remains unclear if Hunter is aware of his current meme status.