You'd think getting stoned and tinkering would be focused and fun. You'd be wrong.

I open the box, and I’m immediately nervous.

It’s not that I’ve never fiddled with hardware before. I got hired as a part-time Systems Admin once with no experience at all. But I was never one of those kids who took apart their toys or built PCs from the ground up. So when I opened up this Arduino starter kit, I was immediately intimidated.

Arduino kits are supposed to be fun, and easy; a DIY-ers dream! But would getting high mellow the fear or freak me out all the more? Only putting this bowl to my mouth will tell.

The website of instructions that came with my particular beginner’s kit is most definitely not written by native English speakers. I copy code and look at the comments and, sure enough, they are in Chinese. Maybe the Arduino site self will be a better place to start…

I find all the examples and tutorials on the site pretty straightforward, and they have tons of easily downloadable sample files. But my problem now is that I can’t upload to my board. So down the oh-so-familiar troubleshooting rabbit hole I go. I don’t see the right port I’m supposed to have. I’m starting to wonder if I have installed things correctly…

I put it into the other USB port to see if that helps and I get a weird message from Mac OS that says:

So I Google that and continue to follow the white rabbit. I’m already grumpy and frustrated. This marks the very first time I think of giving up. Instead, I pick the pipe back up. We can DO THIS!

I’m not finding the right fixes for my upload problem but eventually one forum topic suggests using the external power source, so I get that all setup, but have to move to another area of my living room to be closer to an outlet because this cord is so short. Jesus Christ, WHY IS EVERYTHING SO HARD??? But then the basic Blink example program uploads and I think maybe everything will be OK!

Jesus Christ, these labels on the Arduino are tiny. I have to squint. I feel old. My back hurts.

Back to reading instructions. Oh my god, I have no idea what is going on. This is definitely harder than I want it to be right now. Is this “Building an Arduino on a Breadboard” tutorial how you would replicate an Arduino itself or breadboard basics I need to know in order to successfully do any other project on here? I can’t tell. This is really long and complicated and I don’t have any wires that short. I’m gonna skip it and hope for the best. Back to my Chinese tutorials. Maybe now that I can just run the programs it will make more sense…

Turns out, no not really. I’ve been at this two hours now. I just keep drinking so much water. I put sweet tea liquid water enhancer in it. It’s my secret shame.

OK, so I go the next level of the Arduino tutorial and correctly connect an LED, successfully getting it to blink at varied second intervals. Wow, I finally accomplished something! It’s such a small win but feels so huge. I smoke a joint to celebrate.

“So many things… pretty colored things,” I exclaim as I set back to work on a project that needs various parts and wires.

Oh my god, so much reading again. I think I like putting together Ikea furniture better than this. It’s like an advanced Lego building project where the fun has been drained out. This is when I lose faith a second time. I did already make the LED blink off and on… but come on Alley, you should actually try to construct something. I really just wanna watch TV or go to bed. At this point I am texting my friends more about building this thing than actually building it.

Jesus Christ, these labels on the Arduino are tiny. I have to squint. I feel old. My back hurts. I think it’s time for a snack. I really need to go shopping. I don’t have my usual decent stock. Finally, I find some microwave popcorn. That’ll do.

I think I set up DigitalReadSerial the way it’s supposed to be, but I get to the end of the tutorial and I’m not really sure what the end goal is. I’m supposed to see something in the Serial Monitor but I don’t really know what… um…. I’ll fix myself a bourbon and coke.

I know this is supposed to be celebrating 4/20, but damn it I need a drink to help me through this too. The next project has something to do with a potentiometer. They call it a pot. Haha. Do I have one of those? I don’t know. Should I Google it? Ugh, I don’t want to do this project anyway. At this point I take my bra off. I don’t know why I haven’t done this yet. Let’s try the next tutorial.

Hey, wait. This one has the same wire schema I’ve already put together. It’s an extension of the DigitalReadSerial, so maybe I can figure out if I actually did that one right. It’s a button that will make the onboard LED turn on when pressed, then off. I give it a whirl and… nothing. Maybe I should have done that breadboard lesson earlier. Or maybe I should just look up breadboard basics.

Now I’m realizing I should have just read this Instructables article on Breadboard Basics for Beginners, at the very least it could have helped in future tongue-twister competitions. For a more thorough intro, with an overwhelming amount of links, you can also reference their Comprehensive Guide to Breadboards.

I feel like that kid in The Breakfast Club, the nerdy one played by Anthony Michael Hall, when his shop class lamp won’t turn on and he gets a flare gun that goes off in his locker because the pressure was just too much.

Wait, maybe it does work! I can’t tell if the blinking is randomly intermittent, when I accidentally bump the wires, or when actually press the button. At one point it seems to go on every time my hand comes near it. It is a motion sensor???? No, I’m just really high. I’m also really tired. I can’t get this to work. I feel like a monkey banging against some piece of technology with a stick. 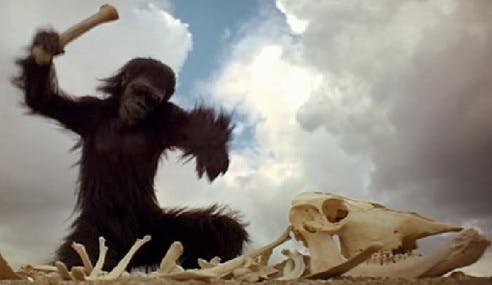 OK, I’m just going to look at a couple more tutorials and see if they make sense. I’d really like to get this basic button working. Maybe I could just do this simple melody if I can find those little speakers… no, just go to bed. You got up on the surfboard once, just once, but you did it. I think that’s good enough. It’s time for the sweet, sweet surrender.

I leave a huge mess. 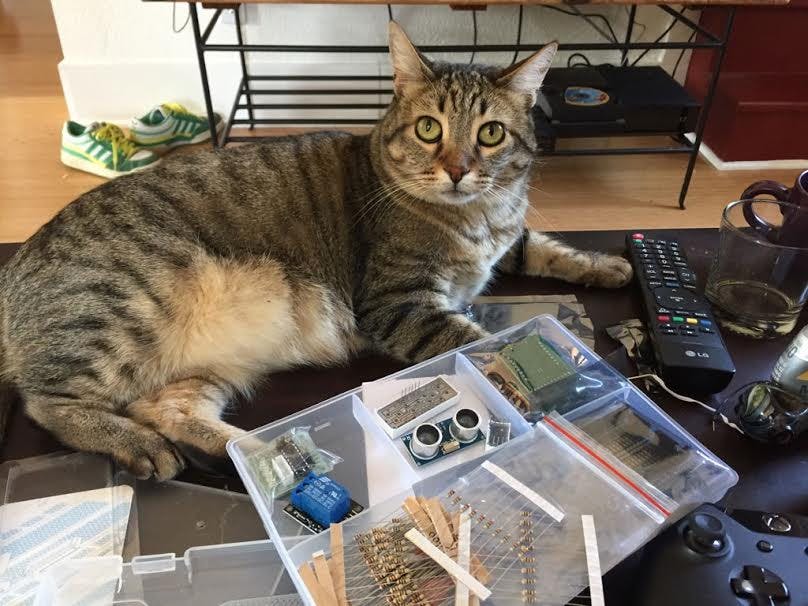 It’s morning now and I just can’t let it go that I didn’t accomplish a project involving the breadboard. First, I revisit the potentiometer. I couldn’t even find it before. There are tutorials involving it on both the Arduino site and my weird little Chinese kit’s site. I finally find what I think it is in my kit but have no idea how to attach it. Neither site really spells this out. There are three pokey things with three holes that clearly connect to the breadboard in some way. What that is I have no idea. The wires just slide right through. Keep in mind, I’m sober here. First it looks like I’ll have to solder? Not happening. But then I see this video and it looks like I just keep them in the same column as the legs on the breadboard. Why did no one spell this out for me?

So I hook it all up and choose the Arduino ReadAnalogVoltage project because it’s simpler. I upload it, open the Serial Monitor, and it FUCKING WORKS. When I twist the pot (haha) the numbers scrolling through the SM go between 0 and 1023. Hell yeah, I think I deserve a morning bowl before I try to actually fade a light.

I almost bail again because, again, I was getting that OS X error that indicated my USB device was using too much power. This time removing the external power was what worked? Clearly this is beyond my understanding level. I go back to the kit that has a simple-looking LED fade with this same pot setup. It tells me to use a 220?Resistor but looking through all my included resistors, I don’t have one. I can only determine this after seeing a 330 and looking up its color scheme (orange, orange, brown, gold) as well as the one for the 220 (red, red, brown, gold) which are close enough to be confusing, especially since my kit included the wrong one. The Arduino fading tutorial that uses the program to fade the LED instead of the pot also uses a 220.

I’m beginning to think that’s the one they meant to include with this kit but messed up. I could try to do the math at this point but I feel like that is a losing battle. I hate you Chinese Arduino Beginner’s Kit! Why did I not get the official one? I actually think there’s no such thing because it’s open source, but I probably could’ve gone with a better brand.

Hell yeah, I think I deserve a morning bowl before I try to actually fade a light.

I’m also still having issues with either the power and/or the ports and it seems to be something related to Yosemite. I do finally get it to work long enough to set up the Tone Melody that plays a very beepy-sounding “Shave and a Haircut.” I also finally get the simple Button to work, but since this wiring is the start to some other projects, I’m just going to try one more because apparently I can’t stop. I don’t quite get the ButtonStateChange one. Clearly not everything I have done is right but when I press the button the Serial Reader does stop so I’ve got it at least wired somehow close to right.

At this point all the next tutorials involve LEDs and the 220 resistors I don’t have. But I have successfully climbed this mountain and I’m not quite ready to throw this circuit board into Mordor, even though that’s how long the journey felt. I was surprised at the level of frustration I felt rather the satisfying geeky and single-minded concentration I have gotten when doing things like making beats in Fruity Loops or Reason when I’m stoned. Perhaps I need a bit more creativity in my projects for them not to feel arduous. Even if those nights in front of a virtual drum machine produced nothing more than a bad rip-off of a 20-second 90s techno loop, maybe that’s enough creative payoff for an artist like me.

If I can get enough skills to pull off LED Firewalker sneaks, then the synthesis of nerd and art might work better. 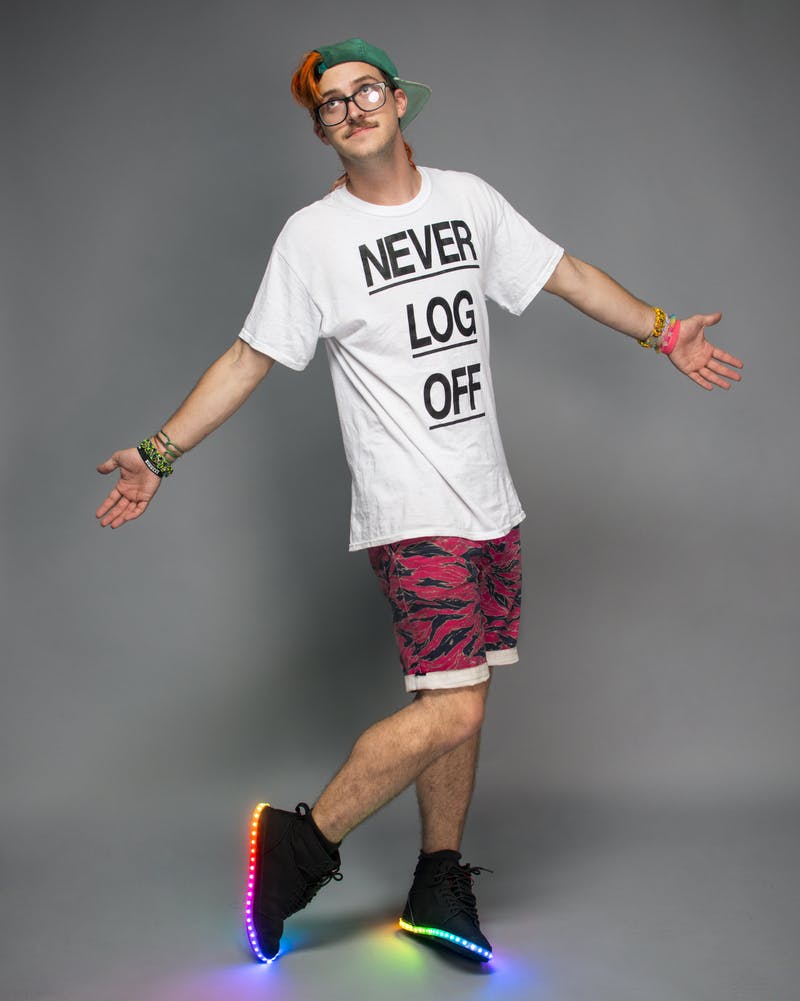