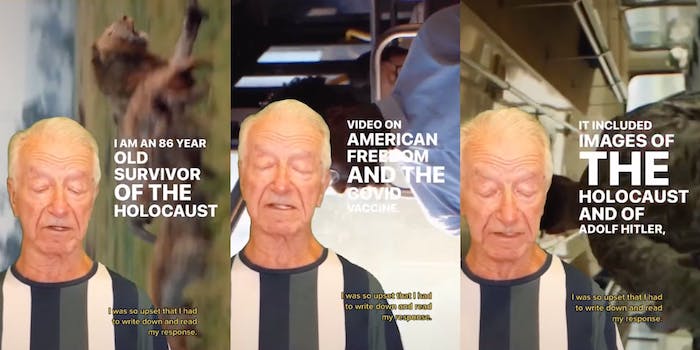 An 86-year-old Holocaust survivor has taken to TikTok to call out Joe Rogan in a viral video on the platform which now boasts over 557,000 views.

The videos were shared by @thetrueadventures, a TikTok account run by authors Gidon Lev and Julie Gray, who have written about Lev’s experience with the Holocaust. They were made in response to Rogan’s Instagram post comparing vaccine mandates to the Holocaust, which has over 5 million views.

“Mr. Joe Rogan, I’m sorry I have to read this,” he says in his first video. “I am an 86-year-old-survivor of the holocaust, and saw your video on American freedom and the COVID-19 vaccine. It included images of the Holocaust and and of Adolf Hitler, the monster who murdered my father, 26 members of my family, and 6 million Jews and others in gas chambers, in ditches, in firing squads, and even in gas trucks.”

The address is split into two videos, with the second asking him to take the offensive content down.

“You want to speak about freedom?” he says. “You are absolutely not promoting freedom, but promoting hate, antisemitism, and possibly even more violence and constant hate. You should apologize to us all, remove the video immediately. It is disgusting and thoughtless and careless and I am shocked by your lack of sensitivity.”

However, some commenters did not show support for Lev’s sentiment, instead defending Rogan.

“But the video is about politicians having way to much power,” one commenter wrote. “The Holocaust was an extreme example of that.”

To this comment, the original posters questioned the use of Holocaust imagery.

The commenter repeated their sentiment, elaborating that the video had been intended to convey the message that “personal freedom should be cherished.”

However, comments like this were in the minority. Other commenters took the opportunity to shut them down.

“So using coopting else’s suffering to make a point when it’s not at all the same thing,” one commenter wrote. “Cool. Cool.”

Another called the comparison “vile.”

“These are public health mandates, NOT an attempt to degrade and annihilate an entire race,” they wrote. “It is a vile comparison.”

Julie Gray, one of the authors who runs the account, told the Daily Dot that she and Gidon have not yet heard from Joe Rogan or his representives.

“Gidon and I have not had a response from Mr. Rogan,” Gray said in a written statement. “Our Tiktok followers have been very supportive of Gidon’s message. Yet there are many who seem not to understand the weight and meaning of the visual cues that Rogan endorsed the use of in the video. Comments have run the gamut from extremely supportive and dismayed to outright antisemitic hatred and threats. To be honest, the comments that concern us the most are those that show a serious lack of knowledge of basic history combined with an inability to discern between historical facts and politicized distortions.”

The Daily Dot has reached out to representation for Joe Rogan regarding the videos.