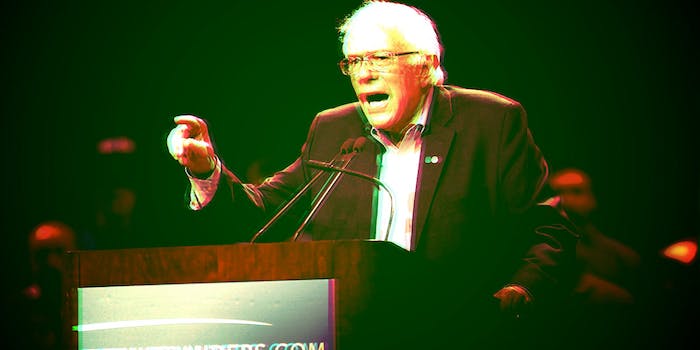 Was Clinton's team feeling the Bern?

Two days after the Iowa Democratic caucus in which Hillary Clinton beat Bernie Sanders by a razor-thin margin, the candidates were shaking hands and kissing babies in the run-up to the New Hampshire primary, but the real action was on Twitter.

The two rivals for the Democratic Party’s 2016 presidential nomination—or, rather, their social-media teams—spent much of the day sniping at each other on the microblogging service about which of them was a true progressive.

It began when MSNBC political correspondent Kasie Hunt asked the Vermont independent senator if he considered the former secretary of state a “progressive.”

Clinton—well, technically, her web team—took offense to this remark and used the opportunity to subtly highlight the narrative of the former New York senator as a seasoned Beltway veteran who knows how to pull the levers of power to accomplish complex policy goals—in contrast to her opponent, whose idealism, they suggested, isn’t tempered by practicality.

A 40-year record of progressive results—boiled down to "some days." https://t.co/ljJvAp6vFT

Sanders’s people fired back in an attempt to maintain the dominant frame of the race—Sanders as a progressive alternative to Clinton.

Incidentally, liberals used to call themselves “liberals” instead of “progressives,” but then they started using “progressive” because the word “liberal” no longer polled well due to a decades-long campaign by conservatives to turn it into a pejorative.

Sanders’s team then posted the video describing Clinton’s progressivism as intermittent at best.

“I think, frankly, it is very hard to be a real progressive and to take on the establishment in a way that, I think, it has to be taken [on], when you become dependent as she has, through her super PAC and other ways, on Wall Street and drug company money,” he said.

Q. Do you think @HillaryClinton is a progressive?
A. Some days, yes. Other days she announces she is a moderate.https://t.co/kIdhjzXZDs

The senator’s campaign then followed up with fierce attacks on Clinton’s record.

Most progressives that I know don't raise millions of dollars from Wall Street.

Most progressives I know are firm from day 1 in opposition to the Trans-Pacific Partnership. They didn't have to think about it a whole lot.

Most progressives that I know were opposed to the Keystone pipeline from day one. Honestly, it wasn’t that complicated.

Most progressives I know were against the war in Iraq. One of the worst foreign policy blunders in the history of the United States.

Clinton’s people, keen to pick up as much liberal support as possible, fired back with a list of her progressive accomplishments over the years, then posted a video of Clinton listing even more of those accomplishments.

.@BernieSanders says Hillary’s been a progressive “some days.” Hillary responds:https://t.co/RCWx5w8oYU

The former secretary of state’s web team then highlighted Sanders’s relatively pro-gun voting record, at least in comparison to her own, among other facts intended to worry the left-leaning Democratic base while positioning Clinton as above the fray of ideological purity.

1) This shouldn't be a debate about who gets to define "progressive"—it should be about who will get real results for American families.

2) Now, if you do want to make it about who's a "real progressive," @BernieSanders, what were you on these days? pic.twitter.com/8Q6hANYPhh

3) An important part of being a progressive is making progress. From health care to fighting inequality, Hillary's record speaks for itself.

Clinton’s team then capped it off by throwing some A+ passive-aggressive shade at Sanders.

In response, Sanders’s team tweeted its own list of not-especially-progressive things that Clinton had done over the years.

So, who won the Great Political Twitter Battle Of The Wednesday Before The 2016 New Hampshire Primary? The answer isn’t clear.

So in one sense, Sanders won. But, in a larger sense, America won, because the country finally got a news story about a political Twitter fight that didn’t involve Donald Trump.