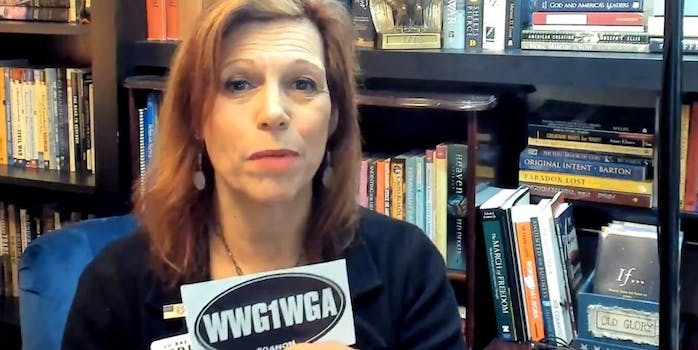 Perkins, who drew three primary opponents, won handily with nearly 50% of the vote.

QAnon followers believe there is a deep state comprising a global pedophile cabal that includes many liberals in government and entertainment. They think that President Donald Trump is trying to take down this network, and that it is equally hellbent on destroying him.

Her victory is either in spite or because of her embrace of QAnon, which she has been increasingly public about in recent months, even chatting with Right Wing Watch about it in January.

“It’s a very, highly calculated risk that I’m taking. Most people play it a lot safer than I do,” Perkins told them. “It’s either pure genius or pure insanity.”

That risk apparently paid off for the three-time candidate for federal office in Oregon.

Following her victory, Perkins posted a triumphant video on Twitter.

“Where we go one, we go all,” she said, referencing the QAnon slogan, often abbreviated to WWG1WGA. “I stand with President Trump, I stand with Q and the team. Thank you anons, thank you patriots, and together, we can save our republic.”

While many mocked her candidacy, Perkins was able to garner financial support. Federal Election Commission data indicates she has raised nearly $25,000 to date, including many donations from WinRed, a fundraising platform endorsed by the Republican National Convention and the president.

Q followers were ecstatic over Perkins’ win. Many view it as evidence of the growing legitimacy of the conspiracy theory that believes, among other things, that John F. Kennedy Jr. is still alive, supports Trump, and has been living in Pennsylvania under the name Vincent Fusca.

Reactions from people who do not subscribe to the bizarre conspiracy theory were a mixture of mocking, facepalming, and horror.

“What a sad state of affairs going on in the Republican party,” said one. “I’m ashamed to have ever called myself a Republican.”

Should Perkins best Sen. Merkley in November, she will presumably pivot to taking on the pedophile cabal.