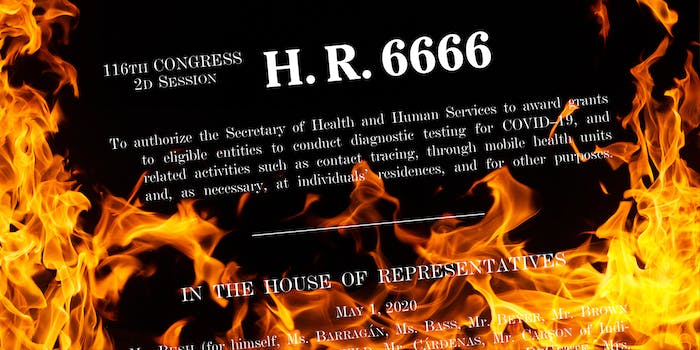 It addresses testing and tracing.

On May 1, Rep. Bobby Rush (D-Ill.) introduced the Testing, Reaching, And Contacting Everyone (TRACE) Act, to help fund coronavirus testing and tracing done through the Department of Health and Human Services.

Testing and contact tracing are considered crucial in the fight to re-establish nationwide normalcy in the wake of coronavirus, and H.R. 6666 wants to provide nearly $100 billion in funding to help that.

The bill has nearly 40 co-sponsors, signifying it has widespread support.

But because of its unfortunate number—6666, which is just 6,000 away from the mark of the devil—it’s developed a cult of concern around the bill, which considers it some sort of satanic offering, and a secret government plot to kidnap kids.

Even conspiratorial posters running for Congress have called out the bill.

There’s even a Change.org petition to get people to sign on to help stop the bill. Over 28,000 people have signed on.

Because the bill proposes testing at individuals’ residences, the conspiracy-minded have taken to believing it will mean the government has the ability to break into homes and forcibly remove anyone.

From the Change.org petition.

HR 6666 violates inalienable rights to one’s person, home and property, to one’s life, freedoms, privacy and security. It is a violation of the Fourth Amendment, as well as the First, Fifth, Eighth and Ninth Amendments of the Bill of Rights. It is an illegal act of forced medical treatment upon We the People and an invasion into our local communities.

Given the divisive nature of the government’s handling of the virus, even testing and tracing can become the focus of unfounded concerns and New World Order conspiracies.

And while it’s true a number like 6666 won’t help get you support from the conspiracy-minded for your legislation, nothing in the bill could remotely bring about what some online are fretting over.