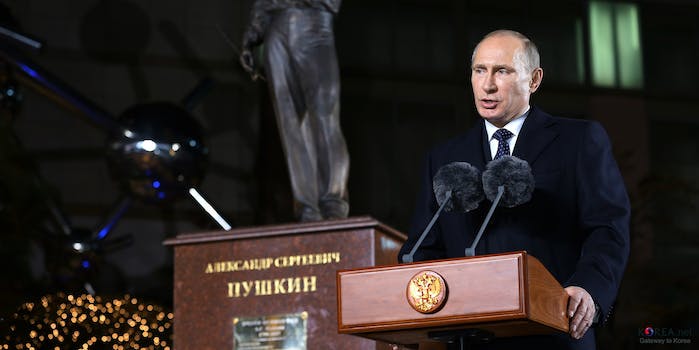 Is Russia rigging the 2016 election for Trump?

Donald Trump thinks the election is 'rigged.' He might be right.

Donald Trump says the 2016 election is rigged, and now the Senate’s top Democrat is worried that he’s right.

“I have recently become concerned the threat of the Russian government tampering in our presidential election is more extensive than widely known and may include the intent to falsify official election results,” Reid wrote in the Aug. 27 letter, which was first published by the New York Times on Monday.

The senator added that such an effort “to undermine our free and fair elections represents one of the gravest threats to our democracy since the Cold War.” Reid called on the FBI to “use every resource available to investigate this matter” ahead of the general election. “The American people deserve to have a full understanding of the facts from a completed investigation before they vote this November.”

Speaking at a cybersecurity conference on Tuesday in Washington, D.C., Comey said the bureau takes “very seriously” any effort “to influence the conduct of affairs in our country, whether that is an election or something else.” He declined to comment specifically on Reid’s letter.

The number of ways Russia has been accused of meddling in the U.S. election seems to grow by the day. Here’s a quick breakdown of how Russia may be inserting itself into the dynamics of the 2016 election.

The wave of suspected Russian intervention began in late June with the release of documents stolen from the Democratic National Committee by Guccifer 2.0, a pseudonymous hacker believed to be part of Russian intelligence.

WikiLeaks later began releasing DNC documents, including more than 22,000 emails, as well as voicemail recordings and other material, which showed a close relationship between the DNC and the campaign of Hillary Clinton, who won the Democratic presidential nomination over insurgent candidate Sen. Bernie Sanders (I-Vt.).

The fallout of the leaks began immediately, with Rep. Debbie Wasserman Shultz (D-Fla.) resigning as head of the DNC just days before the Democratic National Convention. Trump, meanwhile, jokingly suggested that Russia should target Clinton to recover the roughly 30,000 emails she or her staff deleted from her private email setup.

Roughly a month after news of the DNC hack broke, the FBI began investigating a breach of the Democratic Congressional Campaign Committee (DCCC). Guccifer 2.0 later released a cache of documents purportedly stolen from the DCCC that included the personal information of lawmakers and their spouses, as well as congressional staffers.

Authorities believe Russian hackers also targeted reporters for the New York Times and other major news outlets. The suspected breach could potentially give the attackers access to confidential conversations between reporters and their sources, who may be linked to the U.S. political and military establishments.

In perhaps the most direct example of suspected Russian hackers interfering with the U.S. elections, the FBI on Monday warned that attackers breached the election systems of Arizona and Illinois.

Hacker groups linked to Russia’s government reportedly targeted a number of Democratic think tanks in Washington. D.C., that focus their research on Russia, Defense One reported on Monday. The targets include the Center for Strategic and International Studies (CSIS), which confirmed an attack on its systems.

Perils of pointing the finger

Although the Russian government has been accused of carrying out these hacks—and denied any involvement—definitively proving the perpetrators of cyberattacks is often virtually impossible.

“The reality is, it’s messy and hard,” Chris Finan, a former director of cybersecurity legislation in the Obama administration and CEO of Manifold Technology told the Daily Dot in July. “You’re playing poker, you’re often guessing based on probabilities. You can make great guesses, there are really good poker players. But you’re often guessing.”

Regardless of whether attribution can be fully confirmed, Russia has a long history of using cyberattacks to further its ends. Russian President Vladimir Putin, whom Trump has praised as a strong leader, began to utilize cyberattacks nearly a decade ago and has continued to ramp up its cyber aggressions.

Furthermore, no matter who perpetrated the attacks, they’ve all served to benefit Trump, who can use evidence of election system tampering to claim his rigged election theory is true, even if the rigging was ultimately in his favor.