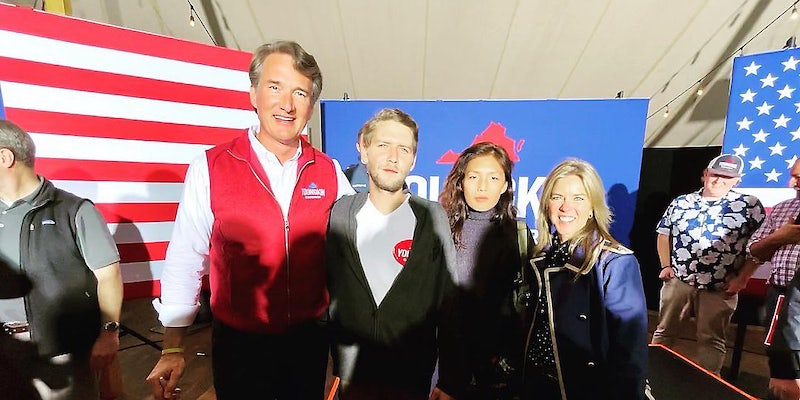 What are these white supremacists doing front-and-center at his rally?

Glenn Youngkin, throughout his campaign, has been accused of flirting with the far-right. Now, they are front-and-center at his rallies with just a day to go.

Two right-wing extremists from Los Angeles have been with the Republican Virginia gubernatorial candidate in the final days of the tight race.

One of the videos reviewed by the Daily Dot shows Isturiz signing the side of the Youngkin campaign bus, while Chang repeatedly says, “white only,” after Isturiz asked for another color pen. This is followed by someone else shouting, “We need more white men!”

That bus appears to be the exact same bus pictured in the much-criticized prank by the Lincoln Project, which sent people pretending to be white supremacists to a Youngkin campaign event.

According to the time stamp on Chang’s Instagram account @mulandystopia, the Lincoln Project prank appears to have occurred on the same day. Virginia’s gubernatorial election is tomorrow. Youngkin and his opponent, former Virginia governor Terry McAuliffe, are in a dead heat.

Both Isuriz and Chang have a long history of disturbing, far-right extremism in Los Angeles.

On April 16, Isturiz was part of a group that destroyed a memorial built by Los Angeles residents for Daunte Wright, an African-American man killed by Brooklyn Center, Minnesota police.

Several weeks later, both Isturiz and Chang screamed racial slurs at a Costco in Torrance, California, after employees asked them to wear a mask.

Isturiz, during a pro-Trump rally on Jan. 9, called Breonna Taylor, an African-American woman killed by Louisville, Kentucky police officers in her own home, a “thug.”

He has also been filmed threatening to shoot Black Lives Matters protestors in Los Angeles and was part of a large anti-COVID vaccine rally at a mass vax site.

Videos posted on their channels appear to show them campaigning with Youngkin.

They can be seen in photographs with Youngkin and Isturiz is wearing a Younkgin shirt in several photos and videos.

In one video, they occupy a prominent place at the front of the stage, handing out signs to Youngkin supporters.

Youngkin, a novice to politics and a former CEO of a private equity firm, is essentially tied with McAuliffe, according to polls. Though Youngkin’s image has been of a Reagan Republican, he supports virtually every position of the de facto leader of the modern Republican Party, former President Donald Trump.