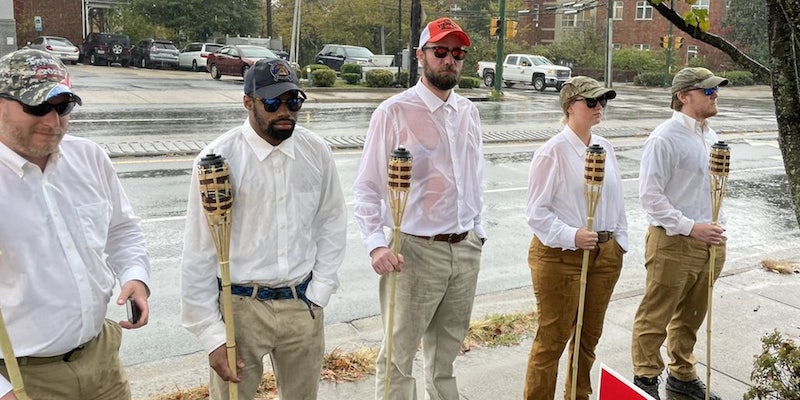 Conservatives accused the Virginia Democrats of posing as white supremacists to frame Youngkin.

The Lincoln Project—the Republican-backed PAC that supports Democrats and has been accused of protecting a pedophile and sexual harasser in its ranks (very credibly, we might add)—had young adults carry tiki torches on Friday at a campaign stop for Republican Glenn Youngkin.

It caused quite the stir online, with numerous Democrats accusing Youngkin supporters of being outwardly racist and conservatives accusing Democrats of staging it.

In the end, it was just the stupid PAC everyone hates.

The group, which wore the same attire as white supremacists who were present at the 2017 Unite the Right rally in Charlottesville, was pictured by numerous people standing outside of Youngkin’s tour bus.

Youngkin, who is currently running for governor against Democrat Terry McAuliffe, was quickly condemned on social media after at least one reporter on the scene claimed that the group was chanting in support of the Republican.

The photograph quickly went viral across Twitter, where numerous high-profile progressives called on Youngkin to denounce his alleged supporters.

Yet conservatives argued that the incident was suspicious, suggesting instead that the group was actually comprised of left-wing activists.

Turns out they were more right than not.

Users on Twitter, 4chan, and other conservative forums began sharing photographs of young Democrats who they believed were responsible. Two employees of the Democratic Party of Virginia were accused, both of whom began locking down their social profiles as a result. It’s unclear if the Lincoln Project used the Democrats in question, or knew of the kind of vitriol they’d be subjected to for the stunt.

The Daily Dot sent direct messages over Twitter to both of the young Democrats to ask about the accusations but did not receive a reply. It remains unclear whether the individuals were among those pictured with tiki torches.

The Daily Dot also reached out to the campaigns for Youngkin and McAuliffe but did not hear back either.

The Democratic Party of Virginia later issued a statement on Twitter denying any involvement.

“The Democratic Party of Virginia, along with its coordinated partners and its affiliates, did not have any role today in the events that happened outside of the Youngkin campaign bus stop today,” the part said. “What happened in Charlottesville four years ago was a tragedy and one of the darkest moments in our state’s recent memories and is an event not to be taken lightly. For anyone to accuse our staff to have a role in this event is shameful and wrong.”

In the end, the Lincoln Project confirmed it in a statement.

“Today’s demonstration was our way of reminding Virginians what happened in Charlottesville four years ago, the Republican Party’s embrace of those values, and Glenn Youngkin’s failure to condemn it,” they wrote.

Others, though, thought the Lincoln Project jumped in to save face.

The Lincoln Project did not respond to a question from the Daily Dot asking explicitly if they’d admit they were behind it.

Cool. Great. Glad we did all that.