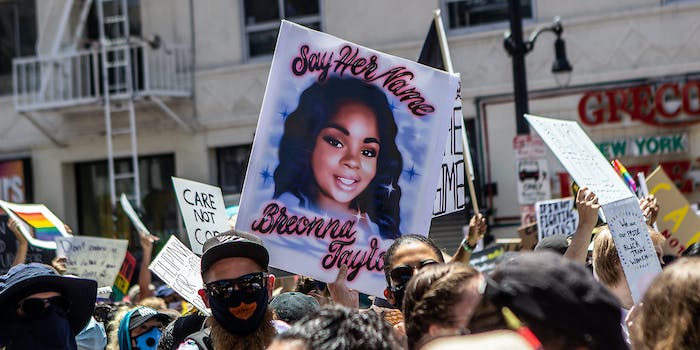 ‘Tired of seeing criminals glorified’: Cops across the country donate to fundraiser for officer who killed Breonna Taylor

Police officers rallied around one of their own, despite the accusations.

Retired and current police officers from across the country donated to a GiveSendGo fundraiser for Myles Cosgrove, the former Louisville Metro police officer who shot Breonna Taylor as part of a no-knock raid at her apartment, a Daily Dot investigation has found.

Police alleged she was receiving drugs at the apartment for a dealer. Cosgrove, along with two other cops, fired 32 shots into the apartment of Taylor after obtaining a warrant to search the premises. Taylor’s boyfriend fired one shot, he said, when police did not identify themselves after pounding on the door and ramming their way through. Police dispute that they did not identify them, and say that one of them was hit by a bullet. No drugs were found in the apartment, and a New York Times investigation of police reports, footage, forensics, and neighborhood testimony found that the raid was compromised by “poor planning and reckless execution.”

Cosgrove, it was determined, fired the shot that killed Taylor, although she was also hit several other times.

After the incident, the officers were placed on administrative reassignment. On GiveSendGo, an alternative to GoFundMe that has become popular in right-wing circles, a fundraiser for Cosgrove raked in over $60,000 dollars.

Among the many donors to the GiveSendGo were current and former police officers who identified themselves as such in the comments and shared their sympathies with Cosgrove.

The data from GiveSendGo was provided to the Daily Dot by Distributed Denial of Secrets, a transparency collective.

“Tired of seeing criminals glorified and hero’s, like Det. Cosgrove, vilified. As a fellow vet and current LEO, my family and I hold you and yours in our hearts and our prayers. God Bless you!!!” read a $100 donation whose name matches up with an officer with the Las Vegas police.

A $50 donation from another self-identified police officer called it “terrible times.”

Another $100 donation shares a similar sentiment, saying they hope he gets enough money for early retirement: “I’m praying for you and your family detective Cosgrove. I hope you are able to get enough donations for early retirement. As a current law enforcement officer I hurt with you” said the comment, adding a Bible quote after.

The Daily Dot is choosing not to name the people who contributed to Cosgrove’s fund.

At least seven donors claimed ties to the Louisville Metro Police Department, where Cosgrove worked. Some said they were retired from the organization, others said their parents and children worked there. Cosgrove was dismissed in January 2021, although a majority of the donations come before then.

“Hope you are able to raise the money to buy your time and retire. Retiring is the best thing I ever did from LMPD. You deserve a good retirement and the city does not appreciate and deserve you. We appreciate your dedicated service,” wrote one on a $50 donation.

Among the over 1,200 donors that the fundraiser had, a great many called themselves families of law enforcement.

A $100 donation came with the comment, “My husband was a police officer for 20 years. Most people do not understand what a police officer and his/her family go through in order to keep our communities safe. Thank you for your service. Our prayers are with you”

At least 20 of the donations come from people self-identifying as retired cops.

A person whose name matches up with a retired Chicago Police sergeant’s name donated with the message that just said: “Chicago Police Sgt-retired.”

“Myles, I wish you and your family peace and serenity… I was fortunate enough to make it through 31 years, and retire, without having been placed in a situation anywhere near what you, and your family, have been, and are currently going through. Hang in there brother…..” wrote another on a $100 donation.

A $35 donation came from a self-identified, retired police officer in Pittsburgh, whom the Pittsburgh Post-Gazette once said had “a history of discipline problems” and had been accused of lying on the job. He was sentenced to a year in prison for perjury.

No police officer was been charged in Taylor’s killing.