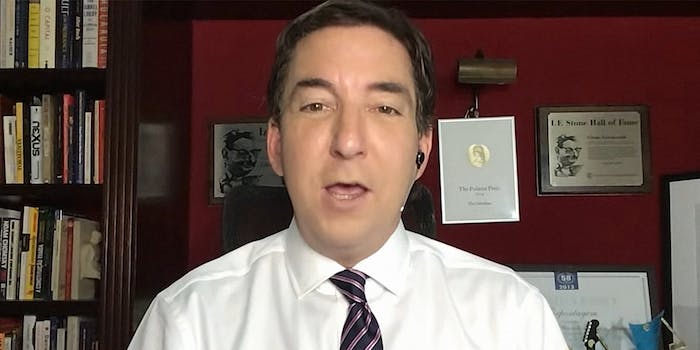 Does Glenn Greenwald have anything better to do?

Fresh off his feud with a top New York Times reporter, journalist Glenn Greenwald has decided to take his Twitter crusade against the current state of journalism to an even higher battlefield, attempting to tear down the gilded gates shielding the nation’s most prestigious institutions.

Wait, no, sorry, he’s doing the opposite. He’s decided to go after an intern who co-bylined her first feature for USA Today. Truly, the noblest of causes from a man dedicated to fighting the righteous fight.

Over the past several months, Greenwald has been tweeting and blogging about what he sees as the demise of earnest “truth to power reporting,” believing that journalists, in his words, have become little more than “hall monitors” who are trying to police speech and thought online.

And while he’s called out big names in tech reporting for this behavior, this weekend he punched down. Way down.

Yesterday, Brenna Smith published her first story as an intern with USA Today. She reported on Capitol riot suspects crowdfunding to help pay legal bills. These suspects include a neo-Nazi using Cash App.

Smith’s story covers how Capitol riot insurrectionists, forced off of mainstream platforms, are turning to lesser-known platforms—some of which embrace the far-right and others that make half-hearted efforts to abide by their terms of service.

Although the article had nothing to do with Greenwald, he took issue with it. He publicly chided Smith for using her new platform to write a piece that just so happened to be Greenwald’s particular bugaboo.

“Congratulations on using your new journalistic platform to try to pressure tech companies to terminate the ability of impoverished criminal defendants to raise money for their legal defense from online donations,” he wrote in a tweet. “You’re well on your way upward in this industry for sure.”

Greenwald has a million followers, many of which have signed up to his feed thanks to his newfound persona as a quasi-right-wing culture warrior (which he would deny he is). And by publicly blasting an intern for merely writing a well-reported story he finds annoying, he’s sending a swarm of trolls to Smith’s mentions, likely knowing that would happen.

Greenwald would deny that critiquing an article is somehow an incitement to harassment, but publicly telling a reporter you think her career prospects are shit sure isn’t a constructive message to help someone early on in their career.

It naturally led to a flood of comments.

There’s nothing noble about Greenwald’s tweets, and he isn’t saving media by moaning online about how much he dislikes a certain type of reporting. Instead, he’s actively making media worse by showing reporters how he can make your mentions miserable because he thinks your article makes you a tattletale.

Greenwald’s crusade against a USA Today writer comes after another USA Today writer, at the sports-focused site For The Win, was forced out of the publication. She was booted after calling out white males in the wake of the Boulder shooting, which turned out to be committed by a Syrian man.

And yet, here Greenwald is—trying to drive more people out of the business.