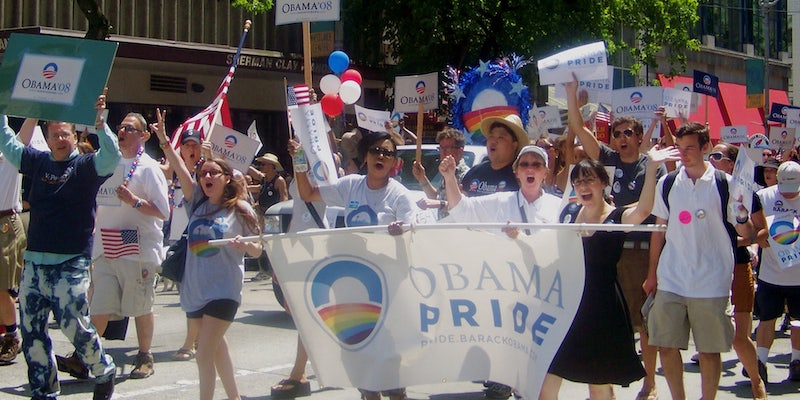 Bad news for Mike Huckabee: When it comes to presidential candidates, the American people would be more comfortable with a gay or lesbian person than an evangelical Christian.

While 61 percent of Americans would be either enthusiastic or comfortable with a gay or lesbian presidential candidate, only a bare majority (52 percent) would approve of an evangelical Christian running for president, according to the latest NBC News/Wall Street Journal poll.

Huckabee, the former Arkansas governor who announced his campaign this week, is a Southern Baptist, a denomination that subscribes to evangelical views of Christian doctrine.

In the same NBC/WSJ poll, only 35 percent of Americans said they would be comfortable (30 percent) or enthusiastic (a slim 5 percent) about a Tea Party candidate. And for all the talk among Republicans about electing someone who isn’t tainted by decades in Washington, only 30 percent of Americans would be either comfortable or enthusiastic about a candidate with no political or governmental experience.

Perhaps the most interesting finding is the fact that only 63 percent of Americans are comfortable or enthusiastic about a candidate over the age of 65. That is only two percentage points higher than the favorability number for a gay or lesbian candidate. Former Secretary of State Hillary Clinton, the frontrunner for the Democratic presidential nomination, is 67.

Despite what people pollsters, they are much more likely to be guided by ideology than by identity or biology factors like sexuality or age. Americans regularly voice support for independent candidates—indeed, 67 percent of respondents in this poll said they were comfortable or enthusiastic about an independent candidate—but no such candidate has won a general election since the rise of the two-party system.

Money, turnout, and ideology matter far more than most of the factors surveyed by the NBC/WSJ pollsters. The exception is the Tea Party question. The overwhelmingly negative response to the idea of a Tea Party candidate spells bad news for Tea Party darling Sen. Ted Cruz (R-Texas) and other conservative Republicans who are vying for the nomination in 2016.