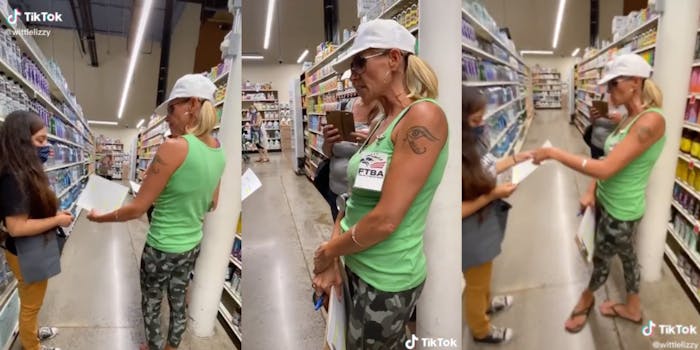 ‘Karen’ says she’s with the ‘Freedom to Breathe Agency,’ tries to intimidate essential worker about masks

No such agency exists.

In a viral video, a woman pretends to be a federal employee with the “Freedom to Breathe Agency”—which is not a government agency—to intimidate a worker for enforcing her store’s mask policy.

The clip was originally posted on TikTok by user Liz Chavez, @wittlelizzy. Armed with a clipboard and laminated badge, the woman hands the store employee a piece of paper and tells her she could personally get sued for telling people to wear a mask in the store.

“You personally need to take this to your manager because you personally can be sued for this, OK?” the woman says.

She claims that the agency was there “making sure that people’s constitutional rights, civil and federal laws are not broken.” Again, she is not part of any legitimate government entity.

The woman follows up to say that the worker is putting herself “at legal liability” while “you are probably paid $15 an hour or $12 an hour.” “You guys need to be careful,” she says, looking into the camera as she walks away.

The viral video has 1.6 million views on Twitter and 1.2 million on TikTok.

This isn’t the first time the fraudulent “Freedom to Breathe Agency,” founded by Lenka Koloma, has made the news. In June, the agency was publicly dinged for selling and promoting fake cards that claim to exempt people from wearing masks.

The laminated cards had the Department of Justice logo on them and claimed the cardholder did not have to wear a mask under the Americans with Disability Act.

“Wearing a face mask posses a mental and/or physical risk to me. Under the Americans with Disability Act (ADA), I am not required to disclose my condition to you,” the cards read.

“Do not be fooled by the chicanery and misappropriation of the DOJ eagle,” said U.S. Attorney Martin in a written statement. “These cards do not carry the force of law. The ‘Freedom to Breathe Agency,’ or ‘FTBA,’ is not a government agency.”