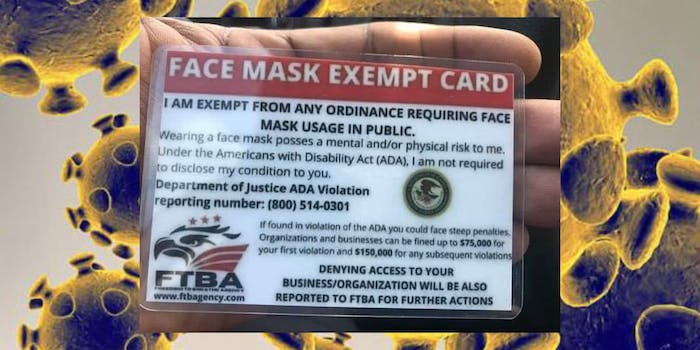 There is also no such thing as the Freedom to Breathe Agency.

Americans unwilling to wear face coverings during the coronavirus pandemic are creating fake medical cards in an effort to skirt mask rules across the country.

One such card, created by a Facebook group known as the “Freedom to Breathe Agency” (FTBA), is designed to be shown to businesses that attempt to block mask-less patrons from entering.

Complete with a Department of Justice (DOJ) logo, the card alleges that blocking customers for refusing to wear a mask violates federal law.

Small print on the card even claims that organizations and businesses can be fined $75,000 for refusing an individual entry and $150,000 for any further instances.

In reality, the cards have no legal standing whatsoever. The shoddy fabrication is also riddled with errors. Aside from failing to properly spell “poses,” the card incorrectly identifies the Americans with Disabilities Act (ADA) as the Americans with “Disability” act.

“Breathing is a vital biological activity to physical and emotional well being. Oxygen is No.1 nutrient for every living organism including humans,” the FTBA says. “Wearing a mask is an unhealthy obstruction of oxygen flow that can lead to hypoxemia and hypoxia, can permanently damage the brain, lungs, heart and about any organ. We must protect our birth right to breathe. This is NOT negotiable.”

The DOJ has since stressed that it has not endorsed the card or any claims made, despite the use of their seal.

The FTBA appears to have noticed, releasing an updated version without the logo or the original spelling mistake. The incorrectly named ADA and the DOJ, however, are still cited.

Multiple versions of the card as well as flyers were available on the group’s website, although the site has since been taken down. It remains unclear whether the FTBA voluntarily removed the website or if it was taken down by the host.