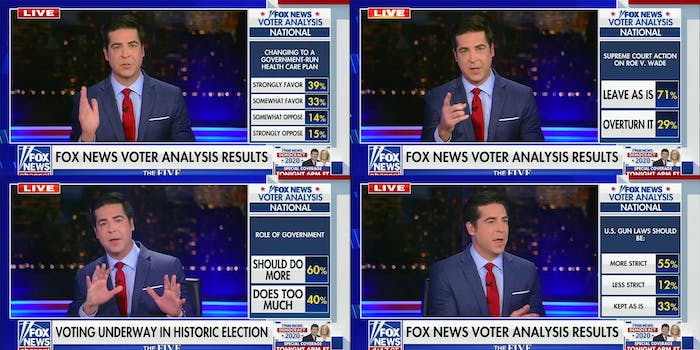 They support abortion, gun control, government healthcare, and a path to citizenship for illegal immigrants.

In these divisive times, it can feel as if Americans have little in common with their counterparts on the other side of the political spectrum.

A Fox News poll results proves otherwise. The poll found that a majority support a swath of big-ticket Democratic policies, including stricter gun control, abortion rights, government healthcare, and a pathway to citizenship for illegal immigrants.

Most Americans support stricter gun control, though by a relatively slim margin, with 55% in favor. Also surprising is that a whopping 72% of those polled believe there should be a path to citizenship for illegal immigrants.

Majorities of those polled similarly believe racism in both society generally and policing specifically are serious issues, are concerned about climate change, and support more government spending on green and renewable energy. They also heavily favor mask requirements.

Regarding President Donald Trump, a majority (58%) believe he hasn’t been tough enough on Russia, and a plurality (44%) think he’s made the country less safe (only 32% believe he’s made the nation safer).

So, essentially, if this poll is to be believed, most Americans stand firmly against the Republican Party platform on basically every major issue, arguably surprising given that a majority of the Senate, Supreme Court, and the presidency are all held by Republicans.

Many took umbrage with how much Fox News’ programming contradicts Americans’ actual values.

“These polls are exactly why they have to rely on disinformation and voter suppression,” tweeted @awwHALEnaww.

“Kinda shows how out of touch with the majority they truly are,” tweeted @Tennesssee_Jed7.

People were alternatively amused, annoyed, and stunned. “It’s like they’re starting to get it, right before our eyes,” said @WilTrahan.

Some wondered if the polls were real (they are).

“My favorite thing about Fox is that they maintain a legit polling unit that routinely embarrasses them,” tweeted @Smorgasboredom.

No matter what happens in the rest of the races, at least Americans do agree on some things.