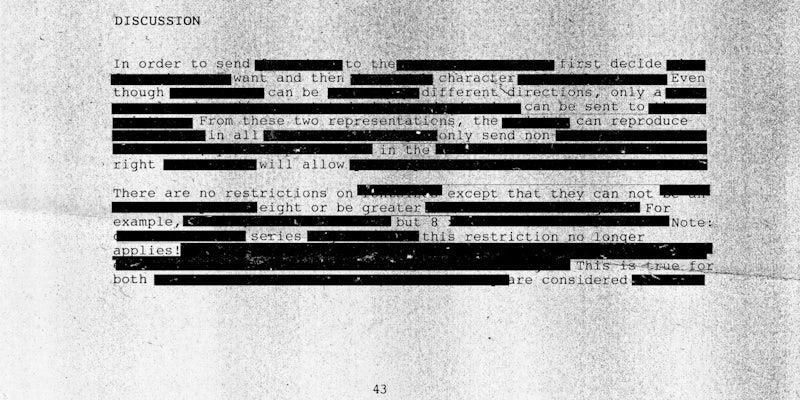 Starting March 1, the FBI will no longer accept FOIA requests via email.

The Federal Bureau of Investigation (FBI) will implement a new policy next month likely to further frustrate people seeking public records under the Freedom of Information Act (FOIA).

At the beginning of March, the FBI will no longer accept FOIA requests via email. Instead, requesters will have to rely on fax machines and standard mail (“snail mail”) in order to communicate with the agency’s records management division. The agency will also accept a fraction of requests through an online portal, provided users agree to a terms-of-service agreement and are willing to provide the FBI with personal information, including a phone number and physical address.

The new procedure mirrors that of other agencies that intentionally rely on archaic technologies to process public records requests. The Central Intelligence Agency, for instance, only accepts such requests by fax, while the Defense Advanced Research Projects Agency (DARPA), which researches advanced technologies on behalf of the Pentagon, also ditched email a few years ago in favor of old-school fax machines. The FBI’s records division has also been known to use computers from the 1980s specifically to create technological roadblocks.

“It’s a huge step backwards for the FBI to switch from a proven, ubiquitous, user-friendly technology like email to a portal that has consistently shown problems, ranging from restricting how often citizens can access their right to government oversight to legitimate privacy concerns,” says Michael Morisy, co-founder of MuckRock, a nonprofit that has helped people file over 28,271 public records requests at more than 6,690 state, federal, and local agencies.

“Given that email has worked well for millions of requests over the years, this seems like a move designed to reduce participation and transparency, and we hope that the FBI will reverse course,” Morisy added.

FOIA is a decades-old law that has become an increasingly popular method for prying loose government documents for public consumption. The revelation that former Secretary of State Hillary Clinton relied on a private, unsecured email server to conduct official government business, for example, was revealed only after then-Vice reporter Jason Leopold requested access to her State Department correspondence.

While the Clinton case illustrates on an extreme level how instrumental FOIA can be in exposing wrongdoing at the highest levels of government, the majority of requests aid reporters and citizens in uncovering more mundane, but nevertheless vital, documents that shed light on the inner workings of the government. As the Supreme Court of the United States famously explained in a 1978 case: “The basic purpose of FOIA is to ensure an informed citizenry, vital to the functioning of a democratic society, needed to check against corruption and to hold the governors accountable to the governed.”

The FBI has repeatedly been charged with, and sued for, deliberately hindering the release of FOIA records in violation of the law. Ryan Shapiro, a PhD candidate at the Massachusetts Institute of Technology (MIT), has accused the FBI in court of deliberately utilizing antiquated technology for the purpose of impeding records requests. The agency is notorious for relying on outdated methods to search for records, despite having access more thorough and modern methods.

“The FBI has constructed a FOIA search protocol that fails by design,” Shapiro told the Daily Dot in October.

“The FBI does nearly everything within its power to avoid compliance with the Freedom of Information Act,” continued Shapiro, whose most recent FOIA project—“Operation 45”—is seeking records related to President Donald Trump. The result, as Shapiro describes it, is an “outrageous state of affairs in which the leading federal law enforcement agency in the country is in routine and often flagrant violation of federal law.” 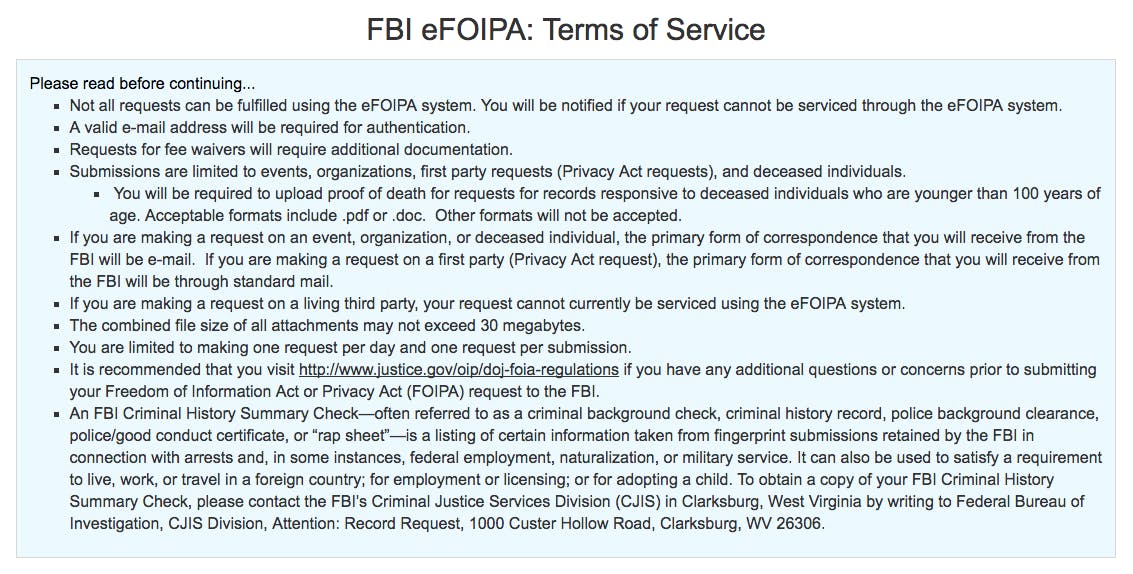 Under the federal statute, the FBI has 20 days to respond to requests (though it can unilaterally extend that deadline by an additional 10 days whenever it deems necessary). But to receive government records from the FBI within a month is almost unheard of—meaning the agency is consistently violating the law, without facing repercussions: FOIA is, unfortunately, entirely toothless as the federal statute does not prescribe penalties of any kind for the agencies that brazenly violate it.

In particular, the FBI’s new online portal system, eFOIPA, is troubling because it suggests there are certain restrictions on filing FOIA requests for which there is no legal basis.

For one, the agency originally said users of its online portal would be “limited to making one request per day and one request per submission.” There isn’t actually a legal limit to how many requests a person can file in a single day. The FBI could argue, however, that it is not violating the law since it continues to accept multiple requests per person via fax or standard mail.

After publication, the FBI told the Daily Dot that its final rollout of the eFOIA online submission system will not limit the number of FOIA requests a single requester can submit per day, a change from the notice it originally sent to users. (Read the FBI’s full statement below.)

Much of the information the FBI now requests from users also appears unnecessary under the law. For instance, it asks users to identify whether the request is being filed inside the U.S. or from another country. Nowhere in the federal statute does it say requesters should provide the FBI with their physical address.

The agency also states that users are “required” to provide “proof of death” along with requests for information about deceased individuals. This is also inherently misleading, as there is no requirement under the law to do so.

“They can’t just have a rule that you have to prove [a person] is dead or have their consent,” FOIA attorney Daniel Stotter told the Daily Dot by phone. “That’s too broad and that’s not what the law says, but they often act as if that’s the law.”

Due to certain privacy exemptions, FBI may deem it necessary to determine whether a person is still alive—though, even files on living persons may be released if the public interest outweighs the need for privacy—but the law does not place that burden on the person who files the FOIA request. The FBI, which is the nation’s top federal law enforcement agency, is perfectly equipped to determine whether a U.S. citizen, at least, is alive or dead.

“These are administrative things that the agency puts out to try to deal with the bulk of the requests they’re getting,” says Stotter. “Unfortunately, they cause a wall to be put up improperly, and that’s where people need to appeal or go to court because the bottom line is, you don’t always need permission or proof of death for a third-party request.”

In April 2016, the Dot requested access to records related to an arcade game featured on the FBI’s website—The Slippery Slope of Violent Extremism (it’s the one with the sheep). The last update from the FBI arrived six months ago:

“The search for records is ongoing or, the search has yielded responsive records and those records have been forwarded to the backlog, where it awaits assignment to a Government Information Specialist (GIS) for processing. Since the search is ongoing. The estimated date of completion for your request is based on the median processing time of complex requests (large processing track). Accordingly, the estimated date on which the FBI will complete action on your request is February 2018.”

In other words, the FBI is claiming that it will take more than 670 days to complete the FOIA request, the only goal of which is to learn more about why the FBI believes it can combat violent extremism with a video game.

But given its track record, there’s no reason to believe this will happen; in fact, there’s a wealth of evidence to suggest that the FBI will continue postponing the release of the records indefinitely until the request is forgotten and reporters stop bugging the agency for updates.

The only recourse in these situations is to sue the FBI. In the case of Slippery Slope, a federal judge would undoubtedly find the agency in violation of the law. But of course, while some news companies can afford to repeatedly engage the FBI in litigation over records requests, the average citizen—for whom the law was designed to benefit—can rarely afford the legal fees, which can range from a few hundred to several thousand dollars.

“If you ever doubted that #FOIA can be a powerful tool,” FOIA researcher Michael Best tweeted on Monday, “just look at how hard the FBI is trying to fight it.”

Update 11:30am CT, Feb. 7: Addressing concerns about its new FOIA policy, the FBI said in a statement to the Daily Dot on Tuesday that it would not limit the number of FOIA requests users of its eFOIPA portal can file:

“The FBI’s eFOIA portal was designed and developed to be the FBI’s primary means for receiving FOIA and Privacy Act requests. The portal provides the FBI with an automated process for the receipt and opening of requests, replacing the current manual process and substantially reducing the time it takes to receive and open each electronic request received. Given the FBI’s high volume of requests, this will significantly increase efficiency.
“The FBI eFOIA portal has been under development and testing for two years. With the full implementation of the portal on March 1, 2017, the terms of service for the site will be modified to allow an unlimited number of requests, no limitation on the number of requests which may be submitted by an individual, and availability seven days a week, 24 hours a day.”

Update 5pm CT, Feb. 7: The FBI tells the Daily Dot it will no longer impose restrictions on FOIA requests submitted through its online portal, nor will it require users to submit certain personal information. Word that it would lift the restrictions to the online FOIA system comes less than 24 hours after the Daily Dot’s initial report.