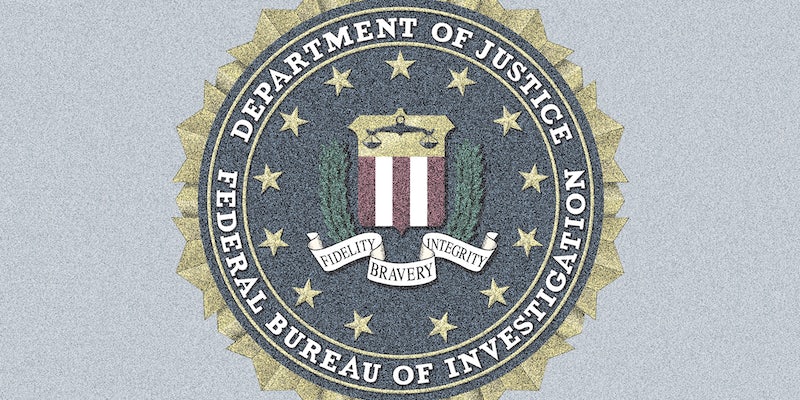 FOIA submissions via email will remain unavailable after March 1.

The Federal Bureau of Investigation will lift all restrictions on its online system for filing public-records requests and limit the amount of personal information users must provide, an FBI spokeswoman told the Daily Dot on Tuesday.

Revelations concerning the expanded capabilities of the FBI’s online records portal, which will launch on March 1, follow reports on Monday that the agency would no longer accept Freedom of Information Act (FOIA) requests via email and would further limit the types and volume of records that requesters could make online.

A terms-of-service agreement on the FBI’s website outlined restrictions for users of its online FOIA-submissions portal, dubbed eFOIPA. The terms stipulated that “not all requests” could be made through the portal and accepted requests would be limited to “events, organizations, first party requests (Privacy Act requests), and deceased individuals.” FBI emails and other types of agency correspondence, which are often requested under FOIA, were excluded from the list, indicating they could only be requested via fax or standard mail.

Users of the eFOIPA system (“Freedom of Information/Privacy Act”), according to the FBI’s website, were also “limited to making one request per day and one request per submission,” an unnecessary restriction under federal law. The system also limited the length of requests to 3,000 characters, far shorter than many FOIA submissions, which often include lengthy legal justifications for the release of certain records.

Attorneys who specialize in litigating FOIA cases expressed concerns on Tuesday over the amount of personal information the FBI intended to collect from users of its online portal: phone numbers, physical addresses, and whether the records were being requested from outside the country. The FBI told the Daily Dot by phone that the country of origin was only necessary to auto-populate address fields on its submission form.

Earlier on Tuesday, the FBI told the Daily Dot it would remove the limit on the number of submissions requesters could make and allow users to file requests 24 hours a day.

“The FBI eFOIA portal has been under development and testing for two years. With the full implementation of the portal on March 1, 2017, the terms of service for the site will be modified to allow an unlimited number of requests, no limitation on the number of requests which may be submitted by an individual, and availability seven days a week, 24 hours a day,” the FBI said in a statement.

First enacted in 1966, FOIA allows groups and private individuals, including non-U.S. citizens, to request documents and other information from U.S. agencies. States also have their own laws governing public-records requests. Researchers and journalists often rely on FOIA to gain access to data and information that would not otherwise be available to the public, from the existence of former Secretary of State Hillary Clinton’s private email account to emails revealing that the director of the federal ethics watchdog authorized a series of bizarre tweets directed to President Donald Trump regarding his potential conflicts of interest.

The federal FOIA statute requires the FBI to fulfill records requests after no more than 30 days. Due to the lack of any penalties for agencies that fail to abide by FOIA’s legal requirements, however, requesters are often left waiting for months or years to receive the documents they request.

FOIA researcher Ryan Shapiro sued the FBI last summer alleging “failure by design” in the department’s methods for searching for records responsive to FOIA requests. A federal judge ruled earlier in another of Shapiro’s lawsuits that the FBI had “unlawfully and systematically obscured” information about its FOIA process, according to the Guardian. Both cases are still in motion.

Sen. Ron Wyden (D-Ore.), a consistent advocate for privacy rights and government transparency, in 2015 challenged the FBI’s identification requirements that forced users of its online system to upload photos of their government-issued IDs. The agency later removed that requirement. In a statement, Wyden expressed concern that the agency’s relaxed restrictions to its online FOIA portal do not go far enough.

“Sen. Wyden has a number of concerns about the FBI’s new FOIA policy, even with the revisions announced today,” Keith Chu, Wyden’s spokesman, told the Daily Dot in an email. “He plans to ask FBI how it justifies limiting access to information the public has a right to access.”

Adam Marshall, an attorney at the Reporters Committee for Freedom of the Press, echoed Wyden’s concerns that the lifted restrictions fail to adequately address the FBI’s approach to records requests.

“I’m glad to hear they are lifting some of the restrictions that were put in place by the online portal,” said Marshall. “But I think there are still significant questions and issues that need to be answered and resolved.”

“I think [email] is the most ubiquitous form of communication,” Marshall added. “And the government should be doing everything it can to make it easier for people to request information—not harder.”