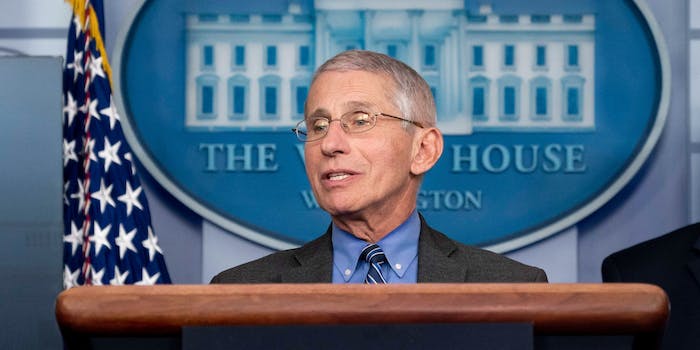 Something being emailed to him isn't the same as him saying it.

The release of hundreds of Dr. Anthony Fauci’s emails has caused an explosion of viral disinformation and conspiracy theories about him and COVID-19 in right-wing circles.

The emails from January through June of last year, obtained by BuzzFeed News and the Washington Post via a Freedom of Information Act request, have inspired claims that Dr. Fauci has known since the beginning of the pandemic that China created COVID-19 as a bioweapon, that he believes masks don’t work, and baseless theories about pedophilia. Right-wing figures are cherry-picking evidence from the emails to support such theories and call for Dr. Fauci not only to lose his job, but be sent to jail.

The claim he believes masks don’t work is based on an email Fauci sent in February 2020 in which he said common (non-medical grade) cloth masks “are not really effective” at keeping coronavirus out because the virus particles are too small.

Those pointing to this as evidence neglect to mention that at the time conditions were far different and scientists didn’t know if masks worked. They present it as if he said this yesterday, not well over a year ago, when experts weren’t recommending masks, and community transmission hadn’t yet been found in the United States.

Weeks later, Dr. Fauci recommended a medical grade mask to decrease the likelihood of transmitting COVID-19. None of those pillorying him about masks seem inclined to mention this fact, however.

The false claim about masks is far from the worst thing being said about the nation’s longtime director of the National Institute of Allergies and Infectious Diseases (NIAID).

One particularly insidious theory is that Fauci “knew all along” that the virus was created in a lab in Wuhan, China, the province where it was first identified, and that he might even have been involved.

As the Daily Dot reported in April 2020, experts have long said that it’s possible the virus escaped from a lab there, and in recent weeks more respectable voices have called for an investigation into the origins of COVID-19. But to date this remains only a theory, albeit a popular one. It also bears mention that last April, the Office of the Director of National Intelligence said that the virus wasn’t manmade.

Now Dr. Fauci’s emails are putting even more fuel on the China-made-COVID-19 fire. Conspiracists point to several emails sent to Dr. Fauci, such as one in which a person wrote that “some of the features look (potentially) engineered,” and one from last April in which another thanked him for dispelling rumors that the virus was leaked from a lab.

Neither email establishes that Dr. Fauci had definitive evidence that COVID-19 was created by or leaked from a lab, in Wuhan or elsewhere. Yet both are being held up as proof that he did.

In another email being offered as proof of the same, a different person offered instructions about how the COVID-19 “bioweapon” was created. The only problem is, as Twitter user @EClonal pointed out, their description of how COVID-19 was supposedly manufactured was lifted verbatim—minus the last sentence—from a 2005 research paper.

Yet another email being offered as evidence that Dr. Fauci knew the virus was lab-created was sent to him by a dermatologist. In it, the dermatologist, who said he was working with a virologist, theorized that “there may be yeast involved because it is sticky and perhaps it came from the Chinese government.”

Dr. Fauci ultimately passed the dermatologist off to a colleague to handle. It’s unknown what, if anything, came from it.

It’s also being ignored by the right that something emailed to Fauci doesn’t carry remotely the same weight as him saying it or believing it.

And while it’s certainly possible that the virus originated in a lab, the bottom line is that we don’t know for sure. But that hasn’t stopped conspiracy theorists, among them many of Fauci’s detractors, from maligning him as being in on some kind of coverup, or even of being involved with creating the virus himself.

Further on the fringe, the theories get even more extreme.

Former Air Force Lieutenant General Thomas McInerney asked his 163,000 Telegram subscribers if there was “anything pizza-related in Fauci’s emails,” apparently referring to the 2016 Pizzagate conspiracy theory about a pedophilia ring operating out of a Washington, D.C. pizza parlor.

McInerney later wondered, “How many trafficked children found there [sic] way to the Wuhan lab for experiments?”

Others on Telegram and elsewhere have echoed similar, baseless claims rooted in the QAnon conspiracy theory that the world is controlled by a cabal of cannibalistic, Satanist pedophiles.

Much of the reporting has focused on how the emails demonstrate the pressure Fauci was under, the hours he worked, and noted his repeated denials that former President Donald Trump’s White House was muzzling him.

While they provide a window into the world of a man at the epicenter of a historic pandemic, the emails have also ramped up already poisonous rhetoric about a longtime public servant being circulated by people who have come to hate him during the pandemic.

Jenna Ellis, who once represented Trump in his effort to overturn the election, is among those using the emails to blame Dr. Fauci for “[ruining] millions of lives.” On Telegram, she accused him of the “crime of the century” and called for him to be imprisoned.

Others also attacked Fauci for the measures taken by federal, state, and local governments, as well as businesses and individuals, to slow the spread of the virus that’s killed roughly 600,000 Americans to date.

Some even believe that Fauci, who’s worked for seven presidents, four of them Republicans, did it all to help the Democrats beat Trump.

The COVID-19 pandemic upended life as we knew it. Much has changed in the year-and-a-half since those first reports of a mysterious new virus emerged. People have lost their lives, loved ones, and livelihoods.

As the nation’s foremost expert in infectious diseases, Dr. Fauci was in the thick of it, in the beginning by then-President Trump’s side, and now by President Joe Biden’s. The pandemic made him a celebrity.

To others, it made him a villain. They’re not through blaming him yet.