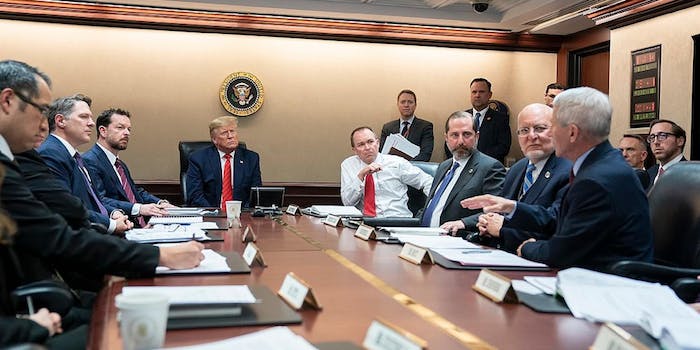 Fauci suggested that Trump was sluggish in his response to the coronavirus.

President Donald Trump shared a tweet about firing the nation’s top infectious disease expert Dr. Anthony Fauci after the immunologist suggested that the federal government was sluggish in its response to the coronavirus.

In an interview with CNN, Fauci, who is part of the government’s coronavirus task force, said that Trump originally ignored recommendations for more severe preventative measures.

“You could logically say that if you had a process that was ongoing and you started mitigation earlier, you could have saved lives,” the immunologist told CNN on Sunday. “We look at it from a pure health standpoint. We make a recommendation. Often, the recommendation is taken. Sometimes it’s not… It is what it is. We are where we are right now.”

Fauci added that “there was a lot of pushback” about the task force’s advice to shut the nation down in February. Trump ultimately ignored the guidance until mid-March.

Shortly after the interview on CNN, Trump retweeted a tweet with the hashtag #FireFauci from a former congressional candidate.

“Sorry Fake News, it’s all on tape. I banned China long before people spoke up. Thank you,” Trump tweeted on Sunday evening.

While Trump did ban entries from people who had recently been in China starting on Feb. 2, the restrictions don’t apply to U.S. citizens or authorized travelers, meaning that about 40,000 have entered the country directly from China, according to the New York Times.

Trump’s tweet against Fauci comes after a scathing article from the New York Times about Trump’s inadequate response to the coronavirus. The article, which was published on Saturday, blamed the president’s “lack of planning” and “faith in his own instincts” for the rampant spread of the coronavirus in the country.

For example, the article notes that a senior medical adviser was clear in an email from late January that the coronavirus was “going to be bad.” The email came six weeks before the president started aggressively fighting the coronavirus, according to the New York Times.

Fauci wasn’t the only subject of Trump’s ire. The president lashed out on Twitter about the New York Times‘ article, as well.

“The New York Times story is a Fake, just like the ‘paper’ itself. I was criticized for moving too fast when I issued the China Ban, long before most others wanted to do so,” Trump tweeted on Sunday night.

About 20,000 people have died from the coronavirus in the U.S., and there are more than 550,000 confirmed cases in the country.