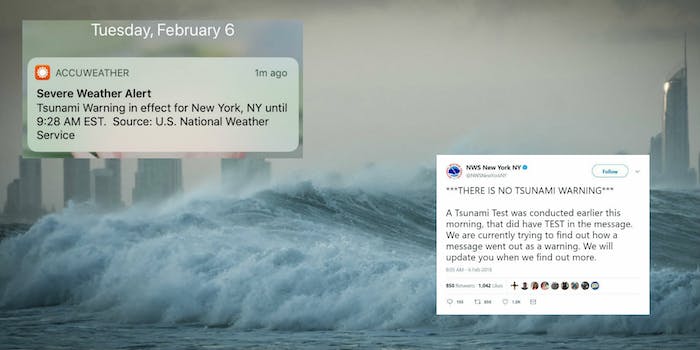 Hawaii wasn't a fluke after all.

You may want to quickly check Twitter the next time you receive an alert notification on your smartphone. The popular Accuweather app accidentally sent out a tsunami alarm to users on the East Coast on Tuesday morning, the latest in a series of embarrassing false alarm errors.

The message was sent at 8:30am ET as a test but ended up transmitting an actual tsunami alert, waking AccuWeather users who had smartphone notifications turned on, reports the Herald Tribune. It reached users on the East Coast, the Gulf of Mexico, and the Caribbean.

The botched alarm is supposedly conducted on a monthly basis to test how long it takes to send and receive alerts, the National Weather Service in Miami said via Twitter.

This is a test that is routinely conducted monthly.

While it was clearly a test to users who opened the full message, the abbreviated push notification simply stated “Tsunami Warning.”

A Tsunami Test was conducted earlier this morning, that did have TEST in the message. We are currently trying to find out how a message went out as a warning. We will update you when we find out more.

AccuWeather blames the National Weather Service (NWS) for the mixup. It claims the text of the message labeled the alert as a test, but the NWS’s computer “miscoded” the message as an actual warning and sent it out to the public. Accuweather said in a statement, “The responsibility is on the NWS to properly and consistently code the messages, for only they know if the message is correct or not.”

The NWS is still trying to figure out what happened and has not responded to AccuWeather’s comments.

The incident comes less than a month after an alarm sent in error warned Hawaiian residents of a ballistic missile attack. The message, which caused widespread panic throughout the islands, read “BALLISTIC MISSILE THREAT INBOUND TO HAWAII. SEEK IMMEDIATE SHELTER. THIS IS NOT A DRILL.” Following an FCC investigation, it was determined that the alarm was sent by a worker who believed there was an actual threat.

Last month, the FCC voted to improve the national emergency alert system so officials can target alerts to more precise locations. The new legislation, which will go into effect in November 2019, gives state employees the ability to send out alerts within a tenth of a mile of any given area.