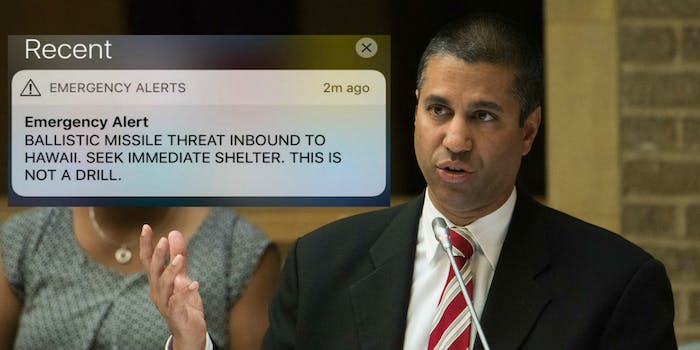 On Saturday, residents in Hawaii woke up to a terrifying text message, “BALLISTIC MISSILE THREAT INBOUND TO HAWAII. SEEK IMMEDIATE SHELTER. THIS IS NOT A DRILL.”

But the warning that put the state into a panic for 38 minutes was sent out in error. Hawaii’s Emergency Management Agency later admitted the false alarm was relayed during a routine test as employees were changing shifts. The embarrassing mistake raises concerns about the state’s emergency preparedness as tensions between North Korea and the U.S. continue to escalate. Now the government is taking action to ensure this type of blunder never happens again.

The Federal Communications Commission (FCC) has launched an investigation into the incident and said Hawaiian authorities “did not have reasonable safeguards or process controls in place to prevent the transmission of a false alert.”

“Moving forward, we will focus on what steps need to be taken to prevent a similar incident from happening again,” the FCC wrote in a statement. “Federal, state, and local officials throughout the country need to work together to identify any vulnerabilities to false alerts and do what’s necessary to fix them. We also must ensure that corrections are issued immediately in the event that a false alert does go out.”

FCC chairman Ajit Pai said the false message was “absolutely unacceptable,” and that it undermines “public confidence in the alerting system and thus reduce[s] their effectiveness during real emergencies.” The FCC is now working with authorities to figure out how the alarm went off. In a press conference on Saturday, Hawaii Gov. David Ige blamed “human error” and said a HEMA worker set the notification drop-down to “Missile Alert” instead of “Test Missile Alert”—a tiny slip with huge consequences. It’s easy to blame the operator, but the more pressing concern is how a single selection from a menu can lead millions of people to receive a false warning message.

The FCC is urging officials to work together to identify similar vulnerabilities in their emergency communications systems and come up with ways of quickly issuing corrections if a false alarm does get sent out.

Hawaii Sen. Brian Schatz, who has been vocal in criticizing civil defense officials for the incident, responded to the FCC’s comments on Twitter.

Just got off the phone w @AjitPaiFCC and glad they are going to work with us on developing best practices on the communications side for states and municipalities to make sure this never happens again. This system failed miserably and we need to start over.

“Just got off the phone w @AjitPaiFCC and glad they are going to work with us on developing best practices on the communications side for states and municipalities to make sure this never happens again. This system failed miserably and we need to start over.”

The FCC controls the wireless alert system and proposed an upgrade after Hurricane Harvey and the California wildfires so it can more accurately target smaller areas. The government agency will vote on the changes on Jan. 30.