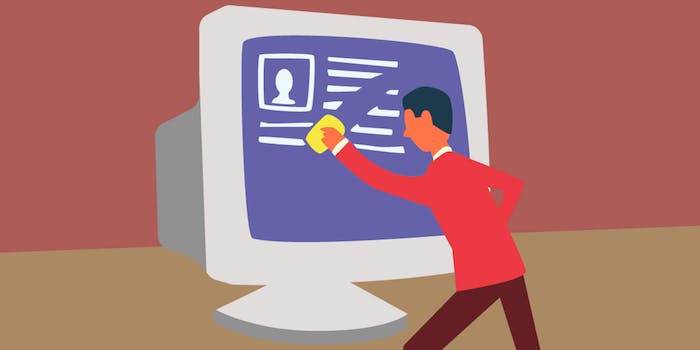 One of the nation's largest school districts couldn't handle day one of distance learning.

With schools and workplaces across the world under quarantine due to the coronavirus pandemic, most schools have turned to online distance learning. But typical online education platforms like Blackboard and Zoom have a learning curve, as Fairfax County Public Schools (FCPS) in Virginia found out this week.

After four weeks of canceled classes, FCPS announced the launch of a new distance learning platform through Blackboard, which allows students to join their teachers in virtual classrooms.

The first day was this week. It turned out to be a complete disaster.

The virtual classrooms in question had no passwords—meaning anyone could access them just by following a URL—and spread widely across forums in part by high school students aiming to disrupt classes. This security oversight resulted in a whirlwind of inappropriate remarks, racist slurs, fat-shaming of teachers, and pornographic images being blasted across students’ computer screens.

It’s not like this was unexpected. Many workplaces discovered last month—when Zoombombing became prevalent, with strangers popping into random chats and spewing hate—that unsecured video conferences and distance learning rooms were vulnerable targets.

With over four weeks to prepare, the country’s 10th-largest school district was forced to, after two days of distance learning, cancel classes for the rest of the week.

It will try again on Monday.

“We encountered unexpected technical challenges over the past couple of days that caused some users to experience issues when logging into the FCPS 24-7 Learning site,” Blackboard told the Daily Dot in a statement. “In addition, we are working with FCPS to require students to log in to the FCPS 24-7 site and authenticate their identity before they are permitted to join a virtual classroom.”

On one school’s website, the racist and sexist comments were characterized merely as things not going “as smoothly as hoped.”

“We’re all kind of in shock about it,” explained one teacher about Monday’s launch debacle. “Students mess around in those chats anyway … as the day went on, the kids started getting more mischievous. By the end of the afternoon, they were posting these links all over 4chan. Schools were being inundated.”

Shortly after the live online classrooms launched via Blackboard, FCPS tweeted that classes would be canceled due to technical issues. Many parents responded in shock.

“They had over a month,” one anonymous parent of two FCPS students vented. “They keep hiring third-party contractors to do this work without any audits and checks.”

Understandably, many parents want answers after four weeks of canceled classes. Up until the Blackboard live classroom attempt, FCPS relied on two educational TV channels with no programming schedule to broadcast some lessons, which one parent described as “from the 1980s.”

Indeed, many other parents voiced concerns over tax increases in Fairfax County and a lack of transparency over where that money goes when it comes to school programs like an investment in Blackboard, a system schools across the country use. Especially when those programs fail.

Fairfax County is the third-wealthiest county in the country, and the school district has a yearly budget of $2.9 billion. And yet it struggled with even the most basic safety implementations.

One mother with two students in the FCPS system described the shock of standing near their child’s computer when the virtual classroom was spammed with images. “I immediately got them to log off,” she said. She empathized with the teachers who had to maintain control in their classrooms while dealing with these issues.

The severity of the attacks varied widely by school. Some students saw only memes, or sophomoric jokes (one student mentioned a prank involving the alias Seemore Butts), while others were subject to racial slurs, pornographic images, and sexually explicit harassment.

One 11th grader at West Potomac High School described a classroom where an anonymous account joined a chatroom and made fun of the weight of the teacher leading the class.

“The fact that there wasn’t a login process for the classrooms initially is kind of ridiculous,” the West Potomac junior said.

The student explained that in order to join a session, a person only had to click a link and enter any name—which can spell disaster when it comes to giving teenagers the power of online anonymity. “It’s very bizarre to me that they didn’t in some way expect that,” the student added.

Some parents and students tweeted at FCPS asking why Zoom was not an option, and why they had to use Blackboard.

One claimed in a tweet that their teacher told them Zoom was not permitted for “educational purposes.”

Ironically, Zoom now actually has a setting that allows users and hosts to verify an account, whereas the primary security issue in the Blackboard debacle is that a simple link grants full access to a classroom.

A Black student at McLean High School described the surreal experience of having three online classes interrupted by the security issues. One class of 20 students started off well until 10 minutes into the lesson when 30 strangers suddenly joined the chat and started to spam loud music, slurs, and memes, including the N-word multiple times. “I actually left the session,” he said. “It was too much.”

Now, he says that his parents do not want him to join FCPS online classroom sessions. When asked if McLean High School or FCPS offered support to students who experienced particularly traumatic and inappropriate messages, he said he had not heard of any.

That same student experienced the same kind of attack in another class of 20, wherein 500 spammers joined mid-lesson and began to mock the teacher’s weight—and even alluded to his mother’s recent passing.

According to the student, the teacher was so distraught he canceled class. That day, he had seen numerous other students in the district sharing links to their classrooms via Snapchat.

Another student at South Lakes High School pointed out that when the links first went out, many students easily turned on their microphones and played loud music to disrupt their class—with teachers scrambling to figure out how to end it.

“I knew that would happen,” said an FCPS senior who saw YouTube videos in March of people pranking college classes using Zoom. “This whole thing is a mess, and people are just making it more of a mess.”

He lamented that the widespread shutdown and coronavirus situation meant particular uncertainty for seniors like him, who had plans to graduate high school in the spring and attend college in the fall, and now find themselves in limbo as they wait out a quarantine with no end date, unable to finish their high school curriculums.

“It’s the uncertainty of it all that’s making this harder,” he said.

In addition to the virtual classrooms being spammed with hate, FCPS (which has nearly 200,000 enrolled students) continues to struggle with Blackboard outages because of so many students joining the online platform simultaneously. The official district Twitter account seemed to announce new plans, and then cancel them, numerous times, leaving students and parents alike in the lurch.

On Wednesday, it tried to implement a two-hour delay to train teachers, but the system crashed again.

“I personally believe [Superintendent Scott] Braband should resign on the grounds of complete incompetence,” said the West Potomac High School junior, who confided that her teachers have been an incredible help during this time, providing comfort and understanding despite her feelings that the school district itself has failed spectacularly in addressing the coronavirus crisis.

In a statement to the Daily Dot, Fairfax County said it was aware of some of the inappropriate behavior, and that it was working to improve security features before classes resumed.

“Unfortunately, there were some incidents involving students who did not respect digital citizenship practices or appropriate language on the first day of distance learning,” a spokesperson told the Daily Dot. “While this was a small number of students who were accessing online classes through guest accounts, some of the foul language and images they shared was very upsetting (understandably) to those that saw them. As we continue to identify students, they are and will be held accountable and subject to disciplinary measures and/or counseling. To prevent this from happening again, software adjustments to the learning management system are underway today. These adjustments are designed to help prevent security issues and to improve reliability and connectivity of the system for users.”