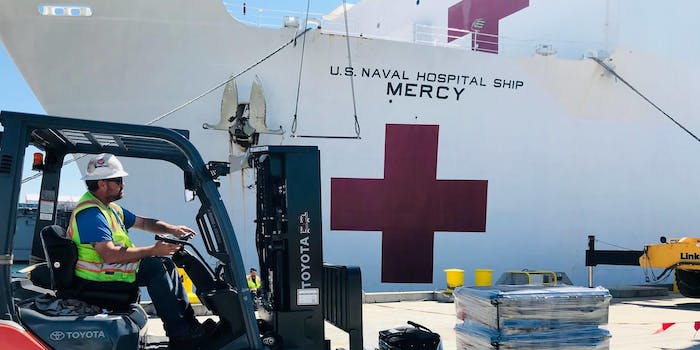 'It's a gross mishandling.'

As coronavirus cases continue climbing nationwide, reports are emerging that the military is struggling to adequately respond to the threat.

Over the weekend, the captain of an aircraft carrier stationed in Guam pleaded with the Navy for help with a coronavirus outbreak on the ship. Captain Brett Crozier of the Theodore Roosevelt took the unusual step of asking the Navy to quarantine the crew in Guam for 14 days, the San Francisco Chronicle reports.

“The spread of the disease is ongoing and accelerating,” Capt. Crozier wrote. “Removing the majority of personnel from a deployed U.S. nuclear aircraft carrier and isolating them for two weeks may seem like an extraordinary measure. … This is a necessary risk.

“Keeping over 4,000 young men and women on board the TR is an unnecessary risk and breaks faith with those Sailors entrusted to our care.”

As news of the captain’s request spread, last night Acting Navy Secretary Thomas Modly told CNN that they are in the process of fulfilling it.

“We have been working actually the last seven days to move those sailors off the ship and get them into accommodations in Guam,” he said.

The coronavirus outbreak on the Theodore Roosevelt highlights what some believe are widespread deficiencies in how the military is handling the coronavirus pandemic.

A public health expert whose spouse is a Naval medical officer stationed overseas tells the Daily Dot that there are serious systemic problems with the Navy’s response to coronavirus. This is putting the military, their families, and civilians at risk, they said.

Speaking on condition of anonymity, they described multiple specific failings in how the Navy is handling the novel coronavirus, COVID-19, all of which trace back to top military leadership.

“From a public health perspective […] it’s a gross mishandling.”

The Navy did not respond to request for comment.

“There has been no official policy put in place in how bases are to respond to this,” they said. “…It’s being left to base commanding officers, their COs and XOs [executive officers], who are not experts in this, to develop plans.”

The Navy’s coronavirus guidelines issued March 21 backs up this assessment. While it does spell out some things, such as reporting deaths and testing requirements, much remained discretionary.

“Local Commanders can be more restrictive based on Command location, local community transmission, risk to mission and risk to force,” it states. “Commanders may … authorize telework opportunities, permissive TAD/TDY [temporary additional duty/temporary duty travel] or work from home as necessary,” and, “Commanders should identify and track all Service Members who travel or have a history of travel in the prior 14 days.” [emphasis added]

Companies worldwide have been teleworking for weeks. Many military posts aren’t suitable for such; however, even among those that are, it’s up to commanding officers to allow. A Department of Defense memo on March 9 said commanders “may” let staff work from home, among other measures such as social distancing. According to DOD News, “The measures are flexible, tailored and incremental and should be tied to the level of exposure in the various communities.”

A former naval officer speaking on condition of anonymity said that they could believe that a commanding officer might be reticent to allow a subordinate to get tested out of fears of losing half their crew to a scare.

“It may start a fire storm at that ship/squadron,” they said, adding that they’d “be surprised if the admirals are being that stupid about this.

There have been reports that top leadership in other branches of the military are similarly failing to issue comprehensive and specific coronavirus guidance, leaving commanding officers to their own discretion.

Soldiers at some bases are allegedly being refused tests, even if they meet the CDC requirements, so physicians are sending them to emergency rooms for testing.

“The problem is not just getting people tested but, by pushing that off base, it’s exhausting local resources,” said the public health expert.

Even as coronavirus infections and deaths rise through the armed services, Military Times reports that the military is only testing those who meet CDC requirements. Until recently, mere symptoms were insufficient to get tested. Initially, the CDC’s testing requirements included a fever of 100.4 or higher, acute respiratory illness, and connection to a known case or recent travel to high-risk area. The Navy guidelines conformed with this.

The close living and working quarters makes the spread of disease even more likely for the military, particularly those on Navy ships. This is further exacerbated by the relative youth of the military, as younger people are more likely to be asymptomatic and thus unknowingly spread coronavirus. Failing to significantly increase testing means that many more are likely being exposed—no one knows how many.

Nevertheless, on March 20, a Navy spokesperson told the San Diego Union-Tribune‘s report that there were no plans to lower the threshold.

Since then, the CDC has apparently loosened the testing guidelines to include those with symptoms and no known contact with a coronavirus case or travel to an impacted area. The public health expert said that some bases are still inquiring about such prior to testing.

The Navy has been lauded for the deployment of hospital ships the Mercy and Comfort to Los Angeles and New York City, respectively. But even this is causing problems, said the public health expert.

This isn’t the only problem with medical care on-base. In addition to being affected by the nationwide shortage of supplies, the Navy isn’t implementing best practices to avoid further spread of the disease, according to the expert.

Specifically, they said that rather than using telemedicine or separate clinics, bases are treating soldiers for conditions other than coronavirus at the same facilities where it’s treating those infected or suspected to be.

The Navy also reportedly waited until mid-March, well after the threat was known, to begin screening passengers on rotator flights, which transport military and civilians. It further didn’t inform people who flew with someone who later tested positive for the disease.

Since the March 21 guidance, the Navy has begun issuing more specific commands related to coronavirus. For example, it has implemented a 14-day “restriction of movement” for personnel returning from certain areas impacted by the pandemic. It has also ordered supervisors to create daily reports of personnel and families who relocate due to risk of contracting the virus.

Still, today the expert said that there continues to be a “lack of direction from leadership and inconsistent prevention methods.”

The Navy isn’t alone in its coronavirus struggles. Other branches of the military have been criticized over their handling of the virus.

All this could easily be contributing to the virus’s spread. Over the weekend of March 19-21, confirmed coronavirus cases among service members nearly doubled, according to Military Times’ managing editor Howard Altman.

As of April 1, there have been more than 1,300 confirmed cases among military, their families, and military employees, according to Altman. Five have died.

The news isn’t all bad, however. The public health expert said that the military has the capacity to greatly assist with coronavirus efforts, both within ranks and in the general population. But leadership has thus far failed to issue such directives.

For example, commanders are left to their own discretion about whether to erect medical tents for treatment and isolation of suspected coronavirus patients, which is considered best practice in a pandemic.

Meanwhile, the military is ramping up secrecy, rather than transparency.

Even as the virus spreads across the fleet, according to the Navy Times, the Navy has stopped reporting the name of ships with positive cases. The public health expert said that military personnel are being ordered not to publicly discuss coronavirus.

“The military is poised to respond fantastically … but leadership is failing.”