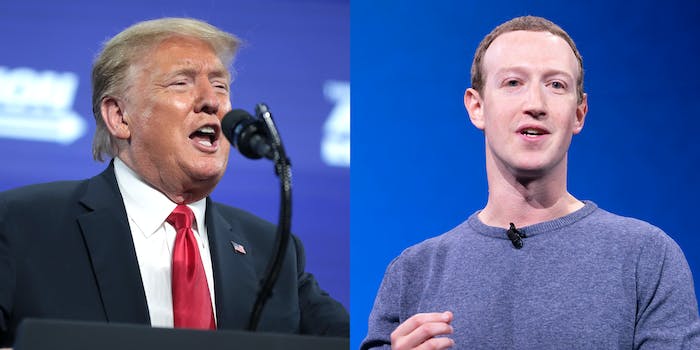 Facebook is ending exemptions for politicians who break its rules

Critics say the policy change has taken 'far too long.'

Facebook will be ending an exemption politicians on the platform received that largely shielded them from the same content moderation rules that are applied to other users, according to numerous reports.

The move from the social media giant comes after the company’s Oversight Board, an independent group of hand-picked journalists, activists, and lawyers that was formed to look at content moderation decisions, gave Facebook until tomorrow to review its policies after it ruled about the nature of former President Donald Trump’s indefinite ban from the platform.

In its ruling, the Oversight Board said that politicians should not get special treatment on the platform and rules “should apply to all users.”

For years, Facebook has treated all posts from politicians as newsworthy, and as such, they would be subject to less restrictions and potential policy violations as other users.

But in the wake of facing a deadline from the Oversight Board—which upheld Facebook’s decision to ban Trump amid the Capitol riots, but said the company needed to review the nature of the ban to conform with its rules—the company will no longer give politicians a pass.

In cases where an exception is made to the policy reversal, Facebook will disclose it publicly, the Post reports. Meanwhile, the Times notes that politicians will be subject to rules against harassment, discrimination, and harmful speech.

The change in policy for Facebook is notable, which has taken a hands-off approach when it comes to politicians (most notably in regards to political advertisements). CEO Mark Zuckerberg has even said that he didn’t think the social media giant should be in the business of being the “arbiter of truth.”

While an official announcement from Facebook is expected today, it is already facing pushback from critics.

“Facebook took far too long to do what was right and obvious to everyone. The company had long staked its rules regarding politicians to a wrong-headed notion of free expression, which privileged the speech rights of the powerful over those of everyone else,” Scurato said in an emailed statement. “As always, it will be crucial to see how Facebook plans to enforce this latest policy change. The company frequently applies its rules only when it’s politically or financially convenient to do so, or it creates loopholes that will allow Facebook to do whatever Facebook wants. Free Press will continue to monitor Facebook’s actions closely to determine whether it takes its own policies seriously.”