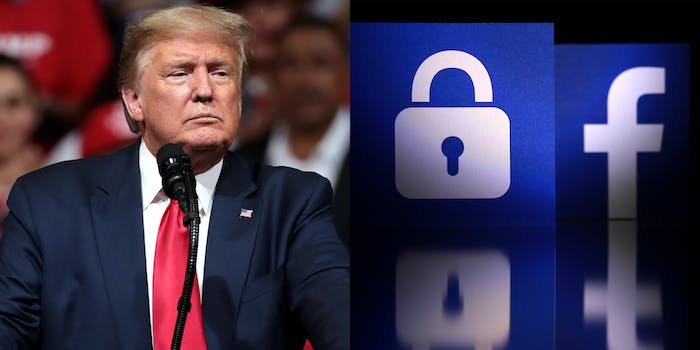 His pages have always been up.

Facebook has clarified that former President Donald Trump remains suspended from the site as rumors swirled online that he had been reinstated.

Trump was indefinitely suspended from Facebook amid the Capitol riot in January. Last month, the social media giant’s Oversight Board, an independent group of hand-picked journalists, activists, and lawyers that was formed to look at content moderation decisions, upheld Facebook’s decision to ban the former president, but said it disagreed with the indefinite nature of the ban.

As part of its decision, the Oversight Board said Facebook had six months to to review the nature of the ban and either “impose a time-limited suspension or account deletion.”

However, while Trump’s pages are visible, they are frozen. Trump cannot post on them.

Facebook spokesperson Andy Stone tweeted on Wednesday evening to clarify that the former president was not reinstated on the platform.

“Nothing about the status of President Trump’s presence on our platform has changed. He remains indefinitely suspended,” Stone tweeted.

While Trump’s Facebook page got more activity yesterday with people commenting on his old posts, as the Los Angeles Times pointed out last month, that’s not exactly out of the ordinary.

The Times, in a story about how the comments section on his posts continue to draw people, described Trump’s account as a “weird internet memorial” for his fans.

So while Trump’s fate on Facebook still remains up in the air as the social media giant deals with the Oversight Board’s decision, as of today he has not been reinstated.