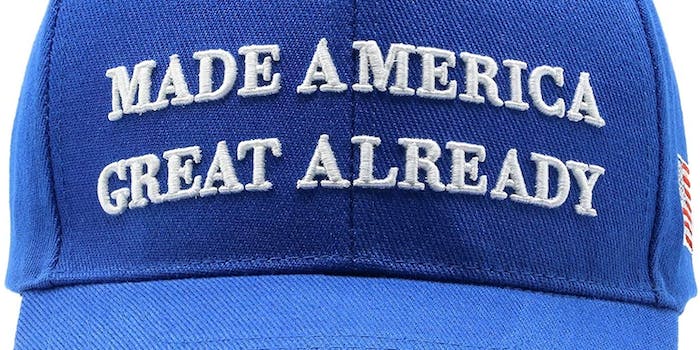 'I rebuke blue MAGA in the name of the lord.'

In the waning days of Donald Trump’s presidency, people are taking time to reflect on what the past four years were. Love him or hate him, Trump was the zeitgeist. His presidency gave us words—bigly, yuge, covfefe—memes, and catchphrases. And the one that entered the lexicon most permanently was “Make America Great Again,” or MAGA. Just the sight of a hat in the shade of red Trump used evokes a visceral reaction from Democrats.

In an apparent attempt to capitalize on liberals’ loathing (or an earnest desire for liberals to do some trolling), someone is selling Democrat-blue hats that say “Made America Great Already.” Although the hats have been available for over a year, they only recently captured the internet’s attention, which quickly dubbed them “Blue MAGA.”

The hats, which are not affiliated with the Democratic party, have a positive rating on Amazon. But the rest of the internet collectively hates Blue MAGA.

“I rebuke blue MAGA in the name of the lord,” tweeted @MichaelBePetty.

Even people who support President-elect Joe Biden, some of whom spent the last four years trolling Trump and his supporters, are appalled by Blue MAGA.

Many felt that it was too much like the thing they just rejected.

In these politically polarized times, it’s rare to find a thing that brings people together, but this has that special something that repels both sides equally.

While they can’t agree on wearing masks, student loan forgiveness, or who should be canceled and for what, at least Americans can agree on something: Blue MAGA sucks.