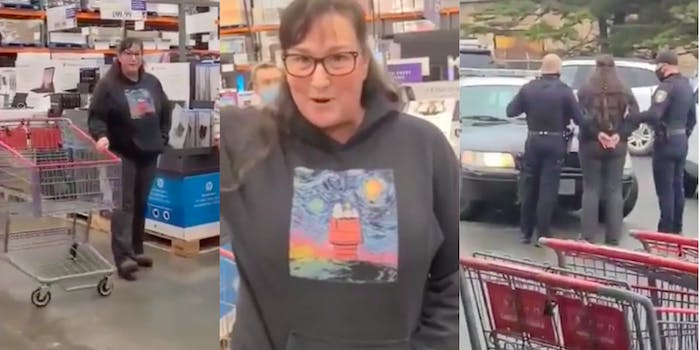 Costco Karen is a walking contradiction after questioning why people are still getting sick if masks really work.

Yet another Karen was filmed going on an anti-mask tirade in Costco. but unlike her predecessors, she did not evade the police.

A video that captured the woman’s tirade and subsequent arrest was posted to the popular subreddit “PublicFreakout.”

In the video, which reportedly took place in Eureka, Northern California, two people can be heard in the background telling the woman, “No mask, no service! Get your a** out!”

The woman then tries to make a case for herself, as an anti-masker. “There’s no reason why I shouldn’t be able to shop without a mask on,” she says.

The person recording her gives her a reason.

“I wonder, stupid. Because they don’t wear their masks,” they say from behind the camera. “Haven’t you heard about the virus?”

The woman continues to shout at the person recording. “The masks don’t work! This has going been on for almost a year now! If they work so well, why are people still getting sick? Can you answer that question?”

The video then cuts to the anti-masker being escorted out of the building by police in handcuffs. ABC affiliate KRCR reports that the woman “strong-armed” a cellphone out of a shopper’s hand but handed it back once she heard that the police were on their way.

KRCR also spoke with the woman who recorded the video. She explained that she was worried about the health of the man she is a caretaker for.

“I had somebody with me in line who I had just taken up to the surgeon. He’s had heart surgery, he’s had a stroke, and that was my main concern. There were a lot of elderly people there. I just don’t get it. I tried to be nice, I didn’t want to yell at her, but I had enough. I had to say something. I was so relieved to see the police come to take her away,” she said.

“Just wear your dang mask,” she made a point to add.

The Eureka Police Department told KRCR that the woman was booked on suspicion that she committed a robbery. A complaint, which was sent to the district attorney’s office, was also filed against her for “failure to comply with the mask order.”