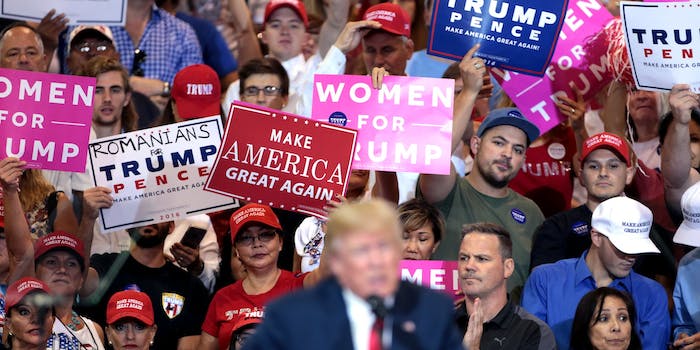 The trending term is causing a wide-range of reactions on Twitter.

Supporters of President Donald Trump are now being referred to as “Vanilla ISIS,” a term that began trending online Wednesday.

Countless users on Twitter have shared an assortment of tweets featuring memes and anecdotes showcasing what they see as similarities between pro-Trump conservatives and the terror group ISIS.

Users noted the shared interests between the two groups in firearms, flags, and holy books, among other things.

Others pointed out that both groups are know for their parades and caravans featuring flag-adorned pickup trucks.

“MAGA being referred to as Vanilla ISIS is the best thing I’ve seen all day,” @ThaPolymath said.

Most just couldn’t help but laugh at the term, which appeared in well over 11,000 tweets.

Numerous memes also made reference to the coronavirus pandemic and the refusal of some Trump supporters to even wear a mask.

The response of Trump supporters to the results of the 2020 election was also brought into the mix.

“This is how Vanilla ISIS acting rn,” @jmclaughlin2233 said.

Conservatives, unsurprisingly, did not find the internet jokes as amusing as others.

“The people calling us ‘Vanilla ISIS’ today are the same people who said we need to unify a week ago,” she tweeted.

Many with ties to the Middle East also asserted that such comparisons were offensive to Arabs and Muslims.

“Since Vanilla ISIS is trending, maybe more of us could stop putting violence through Arab and Muslim references, when its us and western nations with Christian majorities that hold the gold, silver, and bronze for global atrocities,” @rafaelshimunov wrote.