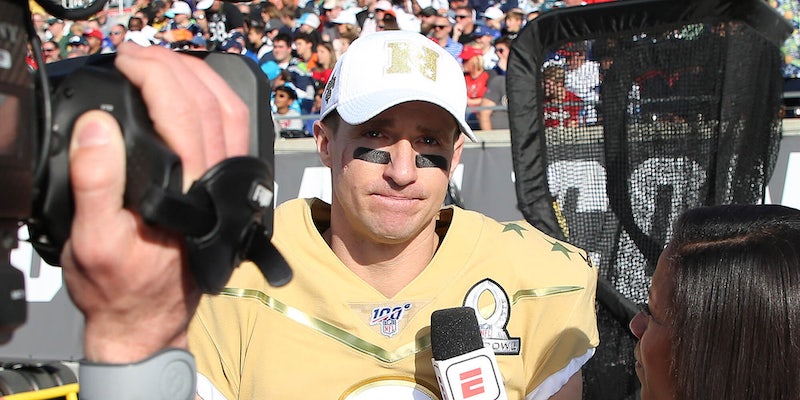 People are canceling Drew Brees after his insensitive protest comments

'I will never agree with anybody disrespecting the flag of the United States of America.'

The NFL season is not scheduled to kick off until Sept. 10, but New Orleans Saints quarterback Drew Brees made sure to keep his team’s name on people’s lips with his divisive comments about protests throughout the United States and within the league.

Speaking to Yahoo Finance’s Daniel Roberts on Wednesday, Brees shared his thoughts on NFL players protesting by kneeling during the National Anthem. Colin Kaepernick kickstarted the movement in 2016, when he took a knee as a protest against police brutality and systemic racism.

As thousands of Americans continue to protest the death of George Floyd, the unarmed Black man killed last week by Minneapolis police officer Derek Chauvin, many people expect to see similar demonstrations when the NFL returns.

“I will never agree with anybody disrespecting the flag of the United States of America or our country,” Brees told Roberts.

The quarterback said he thinks of his two grandfathers who fought in World War II every time he sings the National Anthem and “in many cases it brings me to tears.”

“Is everything right with our country right now? No, it’s not,” Brees continued. “We still have a long way to go. But I think what you do by standing there and showing respect to the flag with your hand over your heart, is it shows unity. It shows that we are all in this together. We can all do better, and that we are all part of the solution.”

Brees’ response missed the point of Kaepernick’s protest, which was never meant as a sign of disrespect toward the American flag but, again, as a stand against the police brutality that has long plagued the United States. Many people—NFL players, NBA players, and fans—let Brees know that by airing their displeasure on social media.

Some of the loudest criticism came from LeBron James, who tweeted, “WOW MAN!! Is it still surprising at this point. Sure isn’t! You literally still don’t understand why Kap was kneeling on one knee?? Has absolute nothing to do with the disrespect of [the flag] and our soldiers (men and women) who keep our land free.”

James continued saying his father-in-law is a veteran and that he never found the “peaceful protest offensive because he and I both know what’s right is right and what’s wrong is wrong.”

“When we step off this field and I take my helmet off, I’m a Black man walking around America, and I’m telling you I’m dealing with these things. I’m telling you my communities are dealing with these things, and your response to me is, ‘Don’t talk about that here. This is not the place.’ Where’s the place, Drew?” Jenkins asked. “Even though we’re teammates, I can’t let this slide.”

Twitter user @MindStable wrote, “I’m a Marine Corps Veteran. Kneeling during the anthem was never disrespectful to us. We served for your RIGHT to either kneel or stand. They were upset with a peaceful protest so they got this one. #DrewBreesIsCancelled”

“Drew Brees doesn’t want to see players kneeling during the national anthem,” the twitter account wrote. “We as a nation of Black people don’t want to see our people dying at the knees, hands, guns of racist police. Millions of people get it now, but you remain callous & insensitive. #DrewBreesIsCancelled.”

“In an attempt to talk about respect, unity, and solidarity centered around the American flag and the national anthem, I made comments that were insensitive and completely missed the mark on the issues we are facing right now as a country,” he wrote. “I stand with the black community in the fight against systemic racial injustice and police brutality and support the creation of real policy change that will make a difference.”