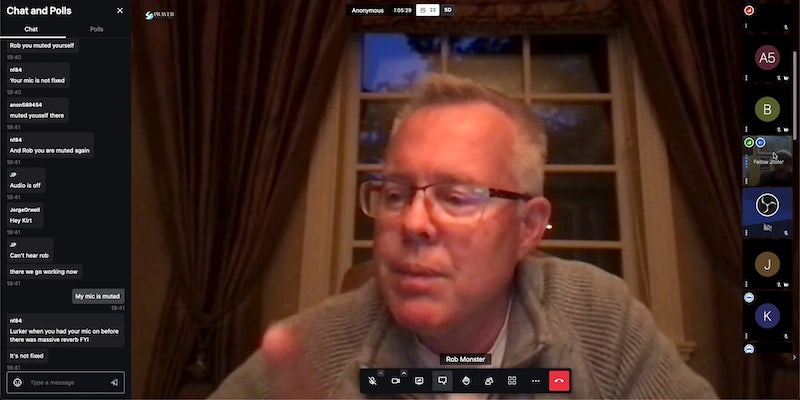 Rob Monster sparred with journalist and hackers and even asked Jesus to rebuke the demons in the room.

Rob Monster, the CEO of domain registrar and web hosting company Epik, finally responded to the massive breach of his company on Thursday evening in a bizarre and chaotic video conference.

Earlier this week a press release from the hacking collective Anonymous announced that “a decade’s worth” of information about Epik was set to be released, including domain registrations, account credentials, and emails.

The data, released online as multiple torrents, contained detailed records revealing the names, addresses, and phone numbers of the individuals who registered some of the far-right’s most popular domains.

Epik has provided services to alternative social media sites such as Gab and Parler and even the neo-Nazi blog the Daily Stormer, which the company says it quickly booted. The company also hosted QAlerts, a website run by a militia member which was integral in spreading the QAnon conspiracy theory.

Initially, Epik told reporters on Tuesday that it was “not aware of any breach.” The following day, Monster sent out an email to customers admitting that it was looking into “an alleged security incident.”

After two days of silence on Twitter, Monster reemerged to invite the public to attend a live question and answer session on his video-conferencing website PrayerMeeting.com.

The Daily Dot was present in the meeting for nearly four hours, where Monster publicly admitted that his company had been breached. Monster alleged that he believed a backup of the company’s data had been hacked and stated that one hacker had almost successfully stolen $100,000 from his Coinbase account with information found in the breach.

The meeting, which included comments from Monster on a range of topics including his religious beliefs, intensified as the chat room became filled with hackers, other journalists, and those affected by the breach.

Independent journalist Steven Monacelli, who first broke the news of the Anonymous hack on Monday, confronted Monster in a heated back-and-forth over Epik’s hosting of a website that had doxed not only him and his family but countless other journalists.

Monacelli was eventually able to convince Monster to bring down the doxing website live on video.

The notably religious Monster reacted to the discovery that Cottle was one of the so-called Demon Hackers with intrigue.

“Demon Hackers. That’s you?” Monster asked. “Wow, that is nuts.”

The conversation took an unexpected turn when Andrew “weev” Auernheimer, a notorious hacker and neo-Nazi who aids white supremacist sites such as the Daily Stormer, entered the meeting.

Monster responded to weev, who he said he had never met before, with a friendly greeting: “Much love to you.”

After Monster stated that he had been unaware that weev had a swastika tattoo, the neo-Nazi flashed the symbol to the chat.

Monster engaged with weev further, asking whether his violent rhetoric advocating genocide was just an act. After being given the floor, weev made numerous antisemitic remarks and defended slavery.

As the hours-long meeting stretched into the night, more viewers entered the chat. Monster, in response to trolling from attendees and other notable hackers, broke out into prayer several times. Monster also called upon Jesus to rebuke any demons that he believed could be present at the conference.

Supporters of Monster and Epik applauded the CEO for speaking openly with the public, seemingly against the wishes of his lawyers.

Although Monster has now officially acknowledged the Epik hack, the fallout is just beginning. Monster described responding to the breach as the most stressful moment in his life.