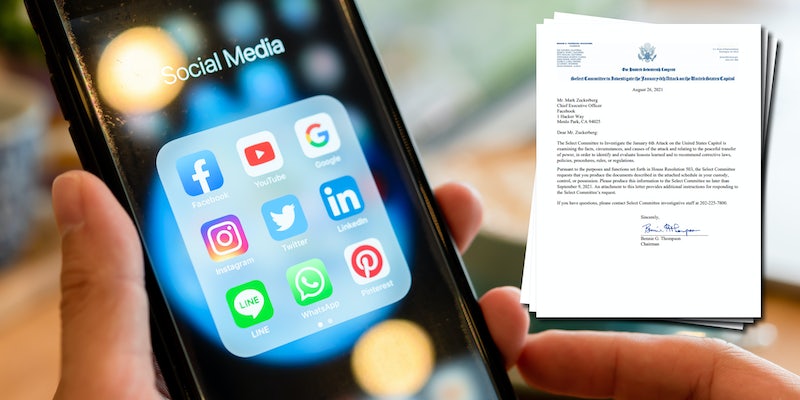 The committee is seeking information from 15 different companies.

The Select Committee in the House of Representatives that is investigating the Jan. 6 Capitol riot is seeking information from 15 social media companies, including big tech giants like Facebook and Google.

Supporters of former President Donald Trump stormed the Capitol on Jan. 6 in a failed attempt to stop Congress from certifying the results of the 2020 election. The mob went to the Capitol after Trump gave a speech that has been accused of inciting the crowd gathered.

Specifically, the committee is seeking records including internal and external reviews, studies, or reports from the social media companies about misinformation about the 2020 election; efforts to “overturn, challenge, or otherwise interfere with the 2020 election;” and violent extremism and conspiracy theories. The committee asked the companies for information they have since April 2020.

Many sites, especially far-right ones like theDonald and Parler, have been accused of being used by Trump supporters to both plan and foment the riot.

The letters ask the companies to respond to the committee’s requests for information by Sept. 9.

“The Select Committee to Investigate the January 6th Attack on the United States Capitol is examining the facts, circumstances, and causes of the attack and relating to the peaceful transfer of power, in order to identify and evaluate lessons learned and to recommend corrective laws, policies, procedures, rules, or regulations,” the committee’s chairman Rep. Bennie Thompson (D-Miss.) said in a statement.

Earlier this week the committee sent letters to numerous executive branch agencies—including the FBI, Department of Justice, and National Archives—also seeking information on Trump and Jan. 6.