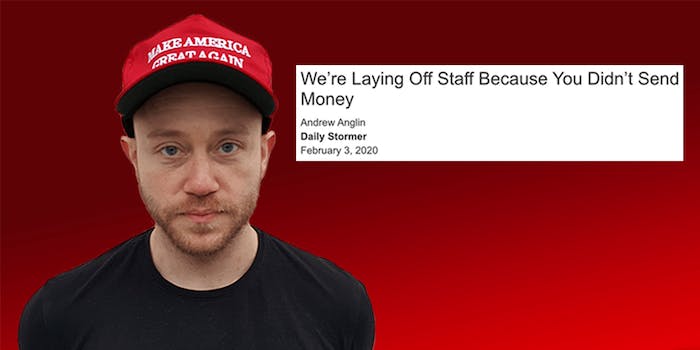 Daily Stormer announces layoffs because its readers are cheap

The neo-Nazi website can't get its followers to fork over enough cash.

The Daily Stormer has announced that it plans to lay off the majority of its staff after readers of the neo-Nazi website failed to send it enough money.

Andrew Anglin, the site’s founder, bemoaned in a post on Monday that numerous writers would have to be let go after less than $5,000 was raised by the Daily Stormer’s readership.

Anglin, who was ordered by a judge last year to pay more than $700,000 to a black woman whom he and his supporters had harassed, described the minimal support as “absurd.”

“A site this size should be able to function comfortably with a modest staff,” he added. “But hey, if people don’t want to send money, we’ll do things differently.”

Anglin further stated that he would be the only full-time writer moving forward and warned that the future of the site’s “race war” section was “up in the air.”

“It is impossible to communicate how depressing this is for me personally,” he continued. “I thought that we were promoting an agenda here that people believed in, but it seems that virtually all of you do not believe in this enough to send $5.”

Characterizing the site as the only large platform devoted to “telling the truth about the Jews,” Anglin ended his tirade by accusing “the overwhelming majority of the readership” of not caring about the Daily Stormer’s white supremacist agenda.