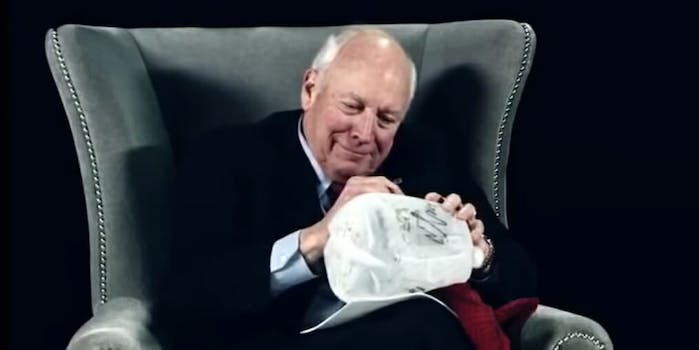 eBay says they have contacted the seller to see if they wanted to re-list the item.

Earlier this week the “waterboarding kit” that former Vice President Dick Cheney signed during Sacha Baron Cohen‘s Who Is America? series was made available to buy on eBay. But shortly after, it was taken down.

The “kit” had bids reaching as high as $3,801 as of Monday, according to Yahoo News, and all of the proceeds were promised to be going to Amnesty International.

The listing, Deadline reports, was made under the moniker Cohen has used in several skits “Colonel Erran Morad” and called Cheney the “godfather” of waterboarding.

“The bottle is made from Military Grade High Density Polyethylene (HDPE), meaning that as well as Water Boarding, it can also be used to Dr. Pepper Board, Clorox Board or even Urine Board potential terrorists or annoying neighbors,” the listing read, according to Deadline. “Please bid freely, not only will you get a fully operational torture, I mean interrogation device, all proceeds from the sale will go to AMNESTY INTERNATIONAL.”

Deadline posted a link to the listing, however, it was soon was taken down off of eBay.

On Tuesday, an eBay spokesperson told the Daily Dot in an email that the Cheney-signed “waterboarding kit” was taken down due to “unusual bidding activity” that was removed “based on our risk models.”

However, the company said those wishing to continue bidding on it may get a chance in the future.

“We’ve been in contact with the seller to assist in re-listing the item if they so choose,” the spokesperson said.