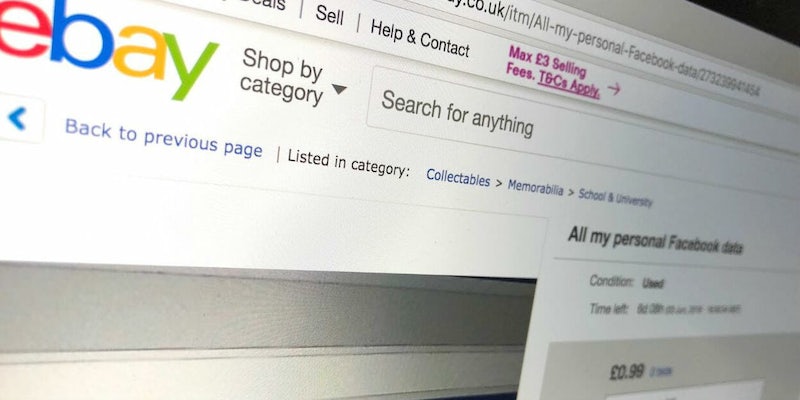 The money was going to be donated.

If you haven’t already heard, your data is crucial to the growth of the internet’s largest companies. Facebook made that much clear over the past few months, having to answer for the recent blunders it made in keeping user data protected. The social giant has been criticized by lawmakers and the public for the ruthless ways it leverages your data to better serve you ads. Only outdone by Google, the social network and its indirect rival account for more than three-fourths of the total digital ad revenue in the U.S.

If your information is so valuable to some of the world’s richest firms, then why shouldn’t you profit from it yourself? It is, as Mark Zuckerberg stressed so many times, your data after all. That’s what 26-year-old Londoner Oli Frost figured. The writer and developer put his Facebook information on eBay to see how much it’s truly worth to people, and the results are surprising.

Frost posted his data in the form of a flash drive onto an auctioned listing with a starting price of 99 cents. Tuesday afternoon, the bidding had gone up to nearly $400 after 40 bids.

Sadly, eBay removed the post before it could get any higher. However, a cached version shows all the info Frost was putting up for sale. This playful list was taken from the “product” page:

“Sell it to advertisers or whatever you want,” he posted.

Instead of giving advertisers his personal data in exchange for better ad targeting, Frost was set to donate the funds he would have received to the Electronic Frontier Foundation (EFF), “who support online privacy and such.”

Obviously, this stunt was just that—an outside-of-the-box way to get people to think about how online players like Facebook take without compensation. At the same time, it’s important to point out that without ads, Facebook would likely be forced to implement a subscription service.

Last month, TechCrunch and BuzzFeed figured Facebook would need to charge between $11 and $14 to offset the ad revenue it would lose. That’s about the price of a Netflix subscription.

Frost provided Gizmodo a statement from eBay explaining why his listing was removed:

Some of your listings haven’t followed our Mailing List and Personal Information policy. Your listing is selling an account for Facebook, which is not permitted as most social networking companies have limitations in their terms of service that restrict the artificial boosting of another member’s following or popularity, or the sale of accounts with established followings.

Given that, eBay as a company has decided not to allow listings that would facilitate or promote this type of activity. While we appreciate that you have chosen to utilize our site, we must ask that you please not relist this type of service.