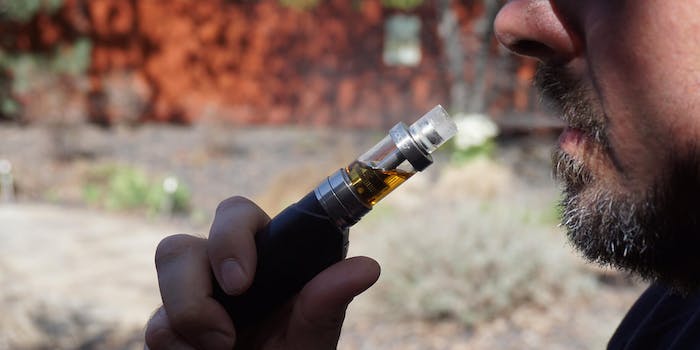 The White House has reportedly been getting data from conservatives.

Some conservatives are worried that President Donald Trump’s move to ban flavored e-cigarettes could cost him in the 2020 election, according to a new report.

The potential ban, which the administration announced it was working on earlier this month, could have an impact in important swing states. Conservatives have been showing data to the White House about it, according to Axios.

Essentially, the data shows that adult vapers in battleground states outnumber the margins by which Trump won them in the 2016 election, Axios reports.

“While parents may be concerned about e-cigarettes, the people who genuinely care about vaping as a voting issue so far outweighs the number of people Trump needs to win in 2020 that they are royally screwing themselves by doing this,” Paul Blair, of Americans for Tax Reform, told the news outlet.

Earlier this month, Health and Human Services (HHS) Secretary Alex Azar said the Food and Drug Administration (FDA) was working on finalizing a policy that would ban the sale of non-tobacco flavored e-cigarettes.

At the time, Trump called vaping a “new problem.” Shortly after the plan was announced, Trump also said he liked vaping as an “alternative to cigarettes” but wanted to make sure it was “SAFE for ALL!”

“While I like the Vaping alternative to Cigarettes, we need to make sure this alternative is SAFE for ALL! Let’s get counterfeits off the market, and keep young children from Vaping!” the president tweeted earlier this month.

As Axios notes, the idea that vapers will swing an election away from Trump relies on a number of assumptions—the biggest being that a large contingent of vaping voters would vote against him because of this one single issue.

So will vapers be the most sought after voting block in 2020?

Probably not, but it’s conceivable some of them could have this issue on their mind when they enter the voting booth.

You can read all of the Axios’ report here.